Land of the Yuta 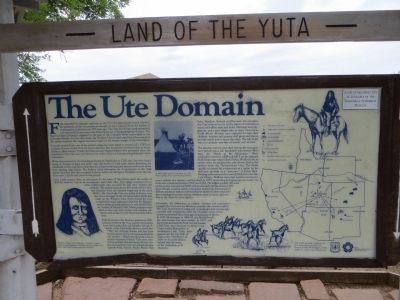 There are three markers on this kiosk

Center Marker
The Ute Domain
First described by Spanish explorers as the YUTA Indians (pronounced Ute-ah), the ancestors of the Ute people are thought to have migrated from the deserts of southeastern California over 700 years ago. The Utes moved into predominately two areas and became somewhat distinct because of that geographical division. The eastern Utes (Colorado) migrated to the east of the Colorado River and settled on the Colorado Plateau. On the other hand, the western Utes (Utah) established their camps in the valleys between the rugged mountain ranges on the eastern margin of the Great Basin.

In south-central Utah, one of the earliest camps has been dated to around A.D. 1380 and consists of stone circle 10 to 15 feet in diameter that would have anchored skin or brush shelters called wickiups. Unlike the Fremont and Anasazi Indians who preceded them, the ancestors of the Utes were not farmers but rather relied on hunting and gathering for their sustenance.
When encountered by the Dominguez-Escalante Expedition in 1776, the 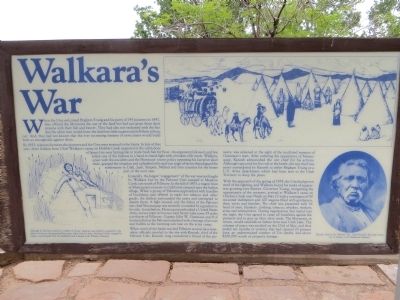 Click or scan to see
this page online
Utes were found living in "houses of grass and earth" near the shores of Utah Lake. Father Escalante, the chronicler of the expedition, describes the Indians as having good features with most of the men wearing long beards. The Indians called themselves the Timpanohtzis or the "fish eaters" but their diet also consisted of plants, herbs and wild game. Escalante wrote that the Utes were a docile and peace-loving people.
Over a half century later, an adventurer by the name of Dan Storm spent the winter of 1839-40 with the Utes in an encampment near Utah Lake. The village consisted of two dozen buffalo-hide tipis occupied by 100 men, women and children. The people kept about 300 horses which they had obtained from the Spanish beginning in the early 1800s. The Utah Lake Utes, according to Storm, were one of the strongest of the six independent bands that made up the western Utes. Storm found the Utes considerably more aggressive than had the Spanish, and he writes of participating in a raid on the Gosiute Indians of western Utah. Many prisoners were taken in this raid with women and children ultimately sold as slaves to the Navajos and the Mexicans.
With the arrival of the Mormon pioneers in 1847, relations between the Utes and the newcomers were at first peaceable and friendly. George A. Smith, of the Utah Indian Service wrote that, "They are virtuous, honest and 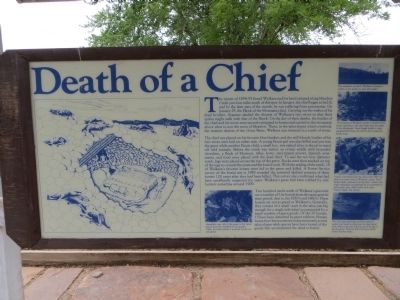 Photographed By Bill Kirchner, June 15, 2014
3. Land of the Yuta Marker- Death of a Chief
free from licentiousness; they are humane and kind to one another." Smith described the Utes as typical mountain Indians. They were wanderers and had seasonal camps all over central and southern Utah including those near Spanish Fork, Payson, Nephi, Manti, Fish Lake, Meadow, Kanosh and Parowan. On occasion, the Utes ventured as far as the plains of Colorado in search of buffalo meat and hides. Marriage was polygamous, and a man might take as many wives as he could afford. Women were expected to raise their children, butcher and process wild game and plants, provide meals, and to move camp. The role of the men, in contrast, was that of hunter and warrior.

The greatest warrior and chief during the early pioneer period was a tall, handsome man named Walkara, the "Hawk of the Mountains." Born somewhere between 1808 and 1815 on the Spanish Fork River near what is now Provo, Walkara rose to power when he assumed the role of war chief in his father's band, the Tim-pan-ah-gos Utes. The Hawk quickly increased his prominence as a leader by his skill and prowess as a "procurer" of horse flesh. Raiding as far away as the coast of California near San Luis Obispo, Walkara terrorized western ranches for over a quarter of a century until his death in 1855. According to fragmentary accounts, his raids were conducted between 1825 and 1854. The largest number of horses stolen on 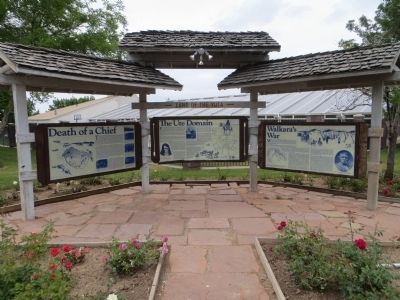 Photographed By Bill Kirchner, June 15, 2014
4. Land of the Yuta Marker
any one raid was 3,000 with several raids netting at least 1,000 head. Horses could be sold at a mountain rendezvous for as much as $50 per animal or traded to other tribes for Indian children who were then exchanged for ammunition, blankets, pots and pans, and trinkets at the Santa Fe slave market.

Inevitably, the differences in culture, customs and economics brought the Utes and Mormon Pioneers into armed conflict. The Utes found their hunting and camping grounds increasing crowded with settlements while the Christian values of the pioneers prevented them from ignoring the issue of slavery. In 1853-54 and again in 1865-67, smoldering hostilities were fanned into open warfare. In 1872, with their ranks decimated by both war and disease, 1,500 Utes were removed by treaty to the Uintah Indian Reservation in northeastern Utah. Today, headquarters for the Ute Tribe of Utah or the "Northern Ute Tribe" as it is now called is located near the center of the reservation at Ft. Duchesne.

Marker at right
Walkara's War
When the Utes welcomed Brigham Young and his party of 143 pioneers in 1847, they offered the Mormons the use of the land but had not given them their streams with their fish and beaver. They had also not reckoned with the fact that the white men would fence the land into little squares and tell them to keep out. And, they had 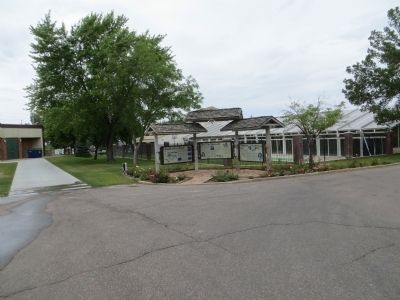 Photographed By Bill Kirchner, June 15, 2014
5. Land of the Yuta Marker
not known that the ever increasing streams of newcomers would build forts as strongholds against them.
In 1853, relations between the pioneers and the Utes were strained to the limits. In July of that year, three Indians from Chief Walkara's camp on Hobble Creek appeared at the cabin door of James Ivie near Springville to trade fish for flour. An argument followed, and Ivie killed one of the Indians in a hand-to-hand fight with a broken rifle stock. Walkara, upset with this incident and the Mormons' recent policy opposing his lucrative slave trade, grasped the situation and unleashed a hit-and-run reign of terror that plagued the settlements in Utah, Juab, Sanpete, Millard and Iron Counties for the better part of the next year.
Ironically, the largest "engagement" of the war was not fought by Walkara but by the Pahvant Utes camped at Meadow Creek just south of Fillmore. In the fall of 1853, a wagon train of Missourians enroute to California camped near the Indian village. When a group of Pahvants approached with bundles of buckskin and offered to trade for tobacco and other goods, the settlers surrounded the party and attempted to disarm them. A fight ensued and the father of the Pahvant War Chief Mosnoquap was mortally wounded by a gunshot to his side. In retaliation, Mosnoquap ambushed a United States Army survey team in bivouac near Sevier Lake some 35 miles northwest 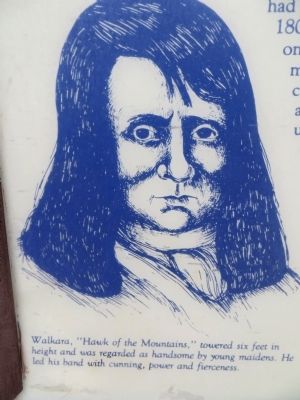 Photographed By Bill Kirchner, June 15, 2014
6. Land of the Yuta Marker - Walkara
of Fillmore. Captain John W. Gunnison and 8 of his men died as the Pahvants attacked with a barrage of arrows and bullets as the morning sun rose on the army camp.
When word of the battle reached Fillmore several days later, White officials traveled to the site with Kanosh, Chief of the Pahvant Utes. Kanosh, long considered a friend of the pioneers, was sickened at the sight of the mutilated remains of Gunnison's men. After ordering the appearance of Mosnoquap, Kanosh admonished the war chief for his actions. Although reproved for his role in the battle, the war chief was never surrendered by Kanosh to either Brigham Young or a U.S. Army detachment which had been sent to the Utah Territory to keep the peace.
With the approach of the spring of 1854, the Utes had grown tired of the fighting, and Walkara found his ranks of supporters growing ever thinner. Governor Young, recognizing the opportunity of the moment, arrived at Walkara's camp on Chicken Creek near Nephi on May 22 with a contingent of 50 mounted militiamen and 100 wagons filled with gentlemen, their wives and families. The Chief was presented with 16 head of oxen, blankets, clothing, tobacco, whiskey, trinkets, arms and ammunition. During negotiations that lasted into the night, the Utes agreed to cease all hostilities against the pioneers and to give up their slave trade. The Mormons, in return would establish 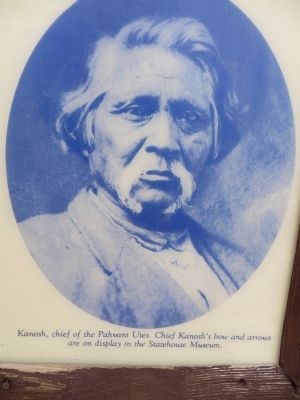 Photographed By Bill Kirchner, June 15, 2014
7. Kanosh, Chief of the Pahvant Utes
an Indian farm near Utah Lake. The calumet of peace was smoked on the 23rd of May, and thus ended 10 months of violence that had claimed 20 pioneer lives, an undetermined number of Ute deaths, and about $200,000 worth of property damage.

Marker at left
Death of a Chief
The winter of 1854-55 found Walkara and his band camped along Meadow Creek just four miles south of this spot. In January, the chief began to feel ill, and by the later part of the month, he was suffering from pneumonia. On January 29, the Hawk of the Mountains died. Carrying out the wishes of his dead brother, Arapene slashed the throats of Walkara's two wives so that their spirits might walk with that of the Hawk. On the day of their deaths, the bodies of the chief and his wives were securely strapped to horses and carried to the mountain above what is now the town of Meadow. There, in the talus slopes which overlook the western deserts of the Great Basin, Walkara was interred in a tomb of stone.
The chief was placed on his favorite blue blanket, and the still-bloody bodies of his two wives were laid on either side. A young Paiute girl was also killed and put into the grave while another Paiute child, a small boy, was staked alive in the pit to ward off wild animals. Before the tomb was sealed, an ornate saddle with brocaded cherubim, a Book of Mormon, rifles, bows, steel-tipped 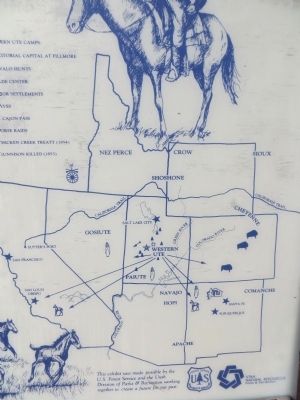 Photographed By Bill Kirchner, June 15, 2014
8. Land of the Yuta
arrows, Spanish ornaments and food were placed with the dead chief. To seal the ten foot diameter tomb, logs were placed across the top of the grave. Rocks were then stacked on top of the logs to conceal the posts and the burial vault. With the sealing of the tomb, 14 of Walkara's favorite horses were led to the grave and killed. A Forest Service survey of the burial site in 1983 revealed the scattered skeletal remains of these horses 128 years after they had been killed. This survey also confirmed what had been unofficially suspected for years: Walkara's grave had been robbed by relic hunters sometime around 1909.
Two hundred yards north of Walkara's gravesite are a number of Ute burials from the same general time period; that is, the 1850's and 1860's. These burials are not as grand as Walkara's. Generally, they consist of a small vault in the talus just big enough for a single individual accompanied by a small number of grave goods. Of the 20 burials, 13 have been disturbed by grave robbers. Human bones have been scattered indiscriminately across talus slopes while graves have been looted of the goods that accompanied the dead at burial.

Topics and series. This historical marker is listed in these topic lists: Native Americans • Settlements & Settlers. In addition, it is included in the Daughters of Utah Pioneers series list. A significant historical month for this entry is May 1927.