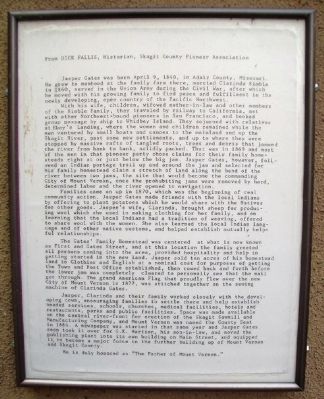 Jasper Gates was born April 9, 1840, in Adair County, Missouri. He grew to manhood at the family farm there, married Clarinda Kimble in 1860, served in the Union Army during the Civil War, after which he moved with his growing family to find peace and fulfillment in the newly developing, open country of the Pacific Northwest.

With his wife, children, wifowed [sic] mother-in-law and other members of the Kimble Family, they traveled by railway to California, met with other Northwest-bound pioneers in San Francisco, and booked group passage by ship to Whidbey Island. They sojurned [sic] with relatives at Ebey's Landing, where the women and children remained while the men ventured by small boats and canoes to the mainland and up the Skagit River, past some new settlements, and up to where they were stopped by massive rafts of tangled roots, trees and debris that jammed the river from bank to bank, solidly packed. That was in 1869 and most of the men in that pioneer party chose claims for their family homesteads right at or just below the big jam. Jasper Gates, 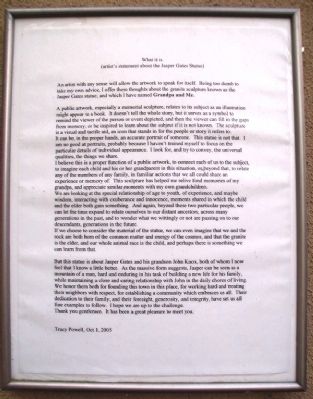 Photographed By William Fischer, Jr., May 23, 2014
2. Grandpa and Me Sculptor Remarks Marker

Click or scan to see
this page online
however, followed an Indian portage trail up and around the jam and selected for his family homestead claim a stretch of land along the bend of the river between two jams, the site that would become the commanding City of Mount Vernon, once the prohibiting jams were removed by hard, determined labor and the river opened to navigation.

Families came on up in 1870, which was the beginning of real community action. Jasper Gates made friends with the local Indians by offering to plant potatoes which he would share with the Natives for other goods. Jasper's wife, Clarinda, brought sheep for producing wool which she used in making clothes for her family, and on learning that the local Indians had a tradition of weaving, offered to share wool with the women. She also learned the local Indian language and of other native customs, and helped establish mutually helpful relationships.

The Gates' Family Homestead was centered at what is now known as First and Gates Street, and at this location the family greeted all persons coming into the area, provided hospitality and help in getting started in the new land. Jasper sold ten acres of his homestead land to Clothier and English at a nominal cost for purposes of getting the lower jam completely cleared to personally see that the mail got through. The grand American Flag that proudly flew over the new City of Mount Vernon in 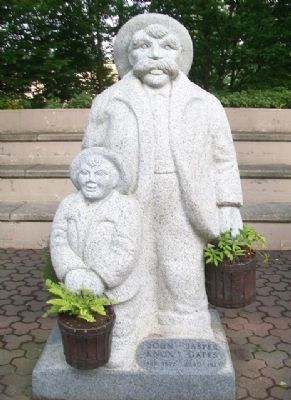 Photographed By William Fischer, Jr., May 23, 2014
3. Grandpa and Me
1877, was stitched together on the sewing machine of Clarinda Gates.

Jasper, Clarinda and their family worked closely with the developing town, encouraging families to settle there and help establish needed services, schools, churches, medical facilities, hotels and restaurants, parks and public facilities. Space was made available on the central river-front for erection of the Skagit Sawmill and Manufacturing Company, and Mount Vernon was named the County Seat in 1884. A newspaper was started in that same year and Jasper Gates soon took it over for G.E. Hartson, his son-in-law, and moved the publishing plant into its own building on Main Street, and equipped it to become a major force in the further building up of Mount Vernon and Skagit County.

An artist with any sense will allow the artwork to speak for itself. Being too dumb to take my own advice, I offer these thoughts about the granite sculpture known as the Jasper Gates statue, and which I have named Grandpa and Me.

A public artwork, especially a memorial sculpture, relates to its subject as an illustration might appear in a book. It doesn't tell the whole story,

Photographed By William Fischer, Jr., May 23, 2014
4. Grandpa and Me Engraving
but it serves as a symbol to remind the viewer of the person or event depicted, and then the viewer can fill in the gaps from memory, or be inspired to learn about the subject if it is not known. The sculpture is a visual and tactile aid, an icon that stands in for the people or story it refers to. It can be, in the proper hands, an accurate portrait of someone. This statue is not that. I am not good at portraits, probably because I haven't trained myself to focus on the particular details of individual appearance. I look for, and try to convey, the universal qualities, the things we share.

I believe this is a proper function of a public artwork, to connect each of us to the subject, to imagine each child and his or her grandparent in this situation, or beyond that, to relate any of the members of any family, in familiar actions that we all could share an experience or memory of. This sculpture has helped me relive fond memories of my grandpa, and appreciate similar moments with my own grandchildren.

We are looking at the special relationship of age to youth, of experience, and maybe wisdom, interacting with exuberance and innocence, moments shared in which the child and the elder both gain something. And again, beyond these two particular people, we can let the time expand to relate ourselves to our distant ancestors, across many generations in the past, and 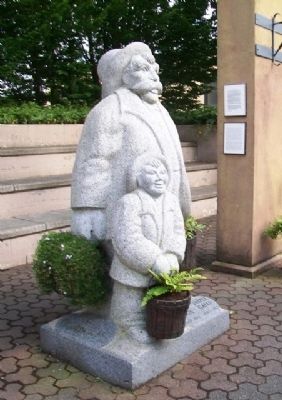 Photographed By William Fischer, Jr., May 23, 2014
5. Grandpa and Me Sculpture and Markers
to wonder what we wittingly or not are passing on to our descendants, generations in the future.

If we chose to consider the material of the statue, we can even imagine that we and the rock are both born of the common matter and energy of the cosmos, and that the granite is the elder, and our whole animal race is the child, and perhaps there is something we can learn from that.

But this statue is about Jasper Gates and his grandson John Knox, both of whom I now feel that I know a little better. As the massive form suggests, Jasper can be seen as a mountain of a man, hard and enduring in his task of building a new life for his family, while maintaining a close and caring relationship with John in the daily chores of living. We honor them both for founding this town in this place, for working hard and treating their neighbors with respect, for establishing a community which embraces us all. Their dedication to their family, and their foresight, generosity, and integrity, have set us all fine examples to follow. I hope we are up to the challenge.

Thank you gentlemen. It has been a great pleasure to meet you. 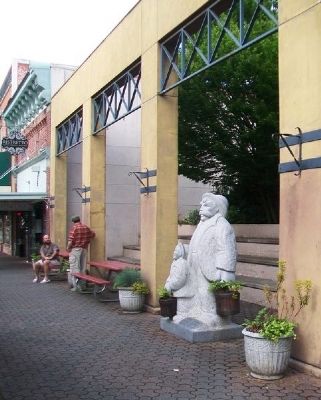