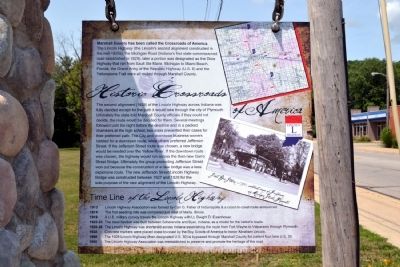 (Side One)
Historic Crossroads of America

Marshall County has been called the Crossroads of America. The Lincoln Highway (the Lincoln’s second alignment constructed in the mid-1920s), the Michigan Road (Indiana’s first state commissioned road established in 1829), later a portion was designated as the Dixie Highway that ran from Sault Ste Marie, Michigan to Miami Beach, Florida, the Grand Army of the Republic Highway (U.S. 6) and the Yellowstone Trail were all routed through Marshall County.

The second alignment (1928) of the Lincoln Highway across Indiana was fully decided except for the path it would take through the city of Plymouth. Ultimately the state told Marshall County officials if they could not decide, the route would be decided for them. Several meetings followed until the night before the deadline and in a packed chambers at the high school, two sides presented their cases for their preferred path. The City and downtown business-owners lobbied for a downtown route, while others preferred Jefferson Street. If the Jefferson Street route was chose, a new bridge would be needed over the 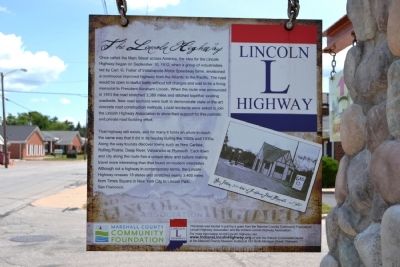 Click or scan to see
this page online
Yellow River. If the downtown route was chose, the highway would run across the then new Garro Street Bridge. Ultimately the group promoting Jefferson Street won out because the construction of a new bridge was a less expensive route. The new Jefferson Street/Lincoln Highway Bridge was constructed between 1927 and 1928 for the sole purpose of the new alignment of the Lincoln Highway.

Time Line of the Lincoln Highway

1913     Lincoln Highway Association was formed by Carl G. Fisher of Indianapolis & a coast-to-coast route was announced.
1914     The first seedling mile was completed just west of Malta, Illinois.
1919     A U.S. military convoy travels the Lincoln Highway with Lt. Dwight D. Eisenhower.
1922-23     The Ideal Section was built between Schererville and Dyer, Indiana, as a model for the nation’s roads.
1926-28     The Lincoln Highway was shortened across Indiana establishing the route from Fort Wayne to Valparaiso through Plymouth.
1928     Concrete markers were placed coast-to-coast by the Boy Scouts of America to honor Abraham Lincoln.
1966     The 1928 Lincoln Highway (then designated U.S. 30) is bypassed through Marshall County for current four-lane U.S. 30.
1992      The Lincoln Highway Association was reestablished to preserve and promote the 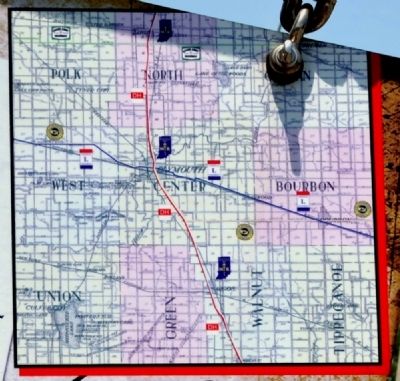 Photographed By Duane Hall, July 17, 2014
3. Early National Highways in Marshall County
Close-up of map on marker
heritage of the road.

(Side Two)
The Lincoln Highway

Once called the Main Street across America, the idea for the Lincoln Highway began on September 10, 1912, when a group of industrialists led by Carl. G. Fisher of Indianapolis Motor Speedway fame, envisioned a continuous improved highway from the Atlantic to the Pacific. The road would be open to lawful traffic without toll charges and was to be a living memorial to President Abraham Lincoln. When the route was announced in 1913 the road stretched 3,389 miles and stitched together existing roadbeds. New road sections were built to demonstrate state-of-the-art concrete road construction methods. Local residents were asked to join the Lincoln Highway Association to show their support for this patriotic and private road building effort.

That highway still exists, and for many it holds an allure in much the same way that it did in its heyday during the 1920s and 1930s. Along the way tourists discovered towns such as New Carlisle, Rolling Prairie, Deep River, Valparaiso or Plymouth. Each town and city along the route has a unique story and culture making travel more interesting than that found on modern interstates. Although not a highway in contemporary terms, the Lincoln Highway crosses 13 states and stretches nearly 3,400 miles from Times Square in New York City to Lincoln Park, 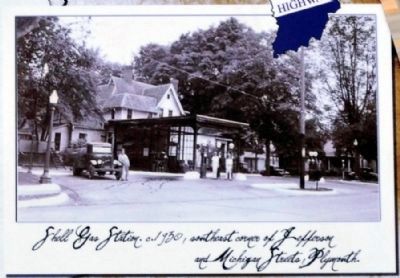 For more information on the Lincoln Highway visit www.IndianaLincolnHighway.org or visit the Historic Crossroads Center of the Marshall County Museum located at 123 North Michigan Street, Plymouth. 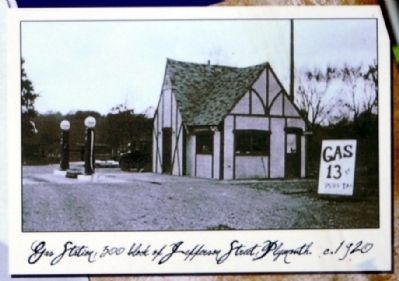 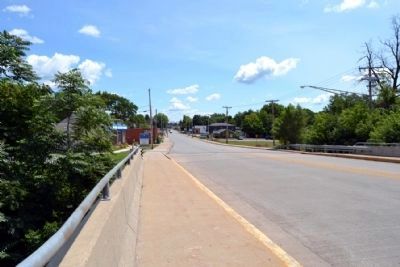 Photographed By Duane Hall, July 17, 2014
6. Lincoln Highway in Plymouth
View to east along Jefferson Street
from the Yellow River Bridge 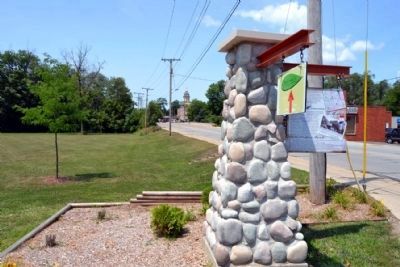 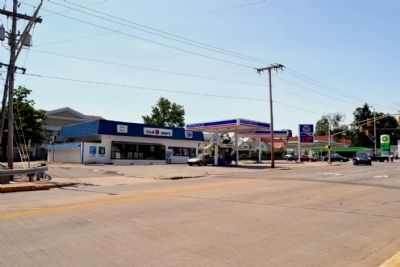 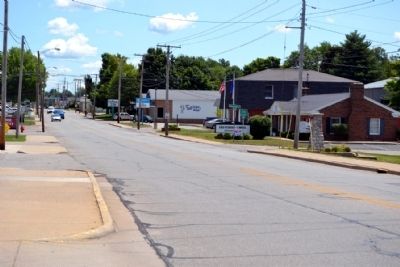