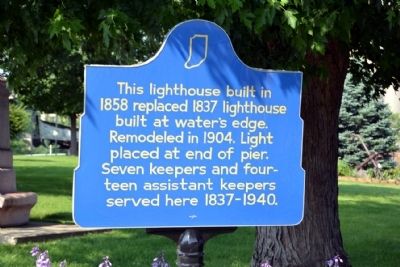 Topics and series. This historical marker is listed in this topic list: Waterways & Vessels. In addition, it is included in the Lighthouses series list. A significant historical year for this entry is 1858.

Location. 41° 43.38′ N, 86° 54.357′ W. Marker is in Michigan City, Indiana, in LaPorte County. Marker can be reached from Lake Shore Drive, 0.1 miles west of Franklin Street. Marker is located on the grounds of the Michigan City Old Lighthouse Museum. Touch for map. Marker is at or near this postal address: 1 Washington Street, Michigan City IN 46360, United States of America. Touch for directions. 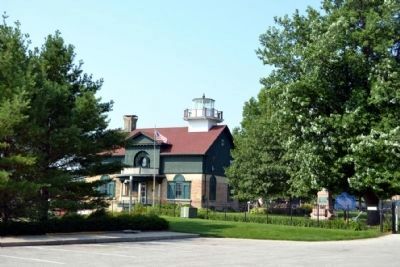 Photographed By Duane Hall, July 22, 2014
2. Michigan City Lighthouse
Marker is located at the entrance
to the grounds of the Old Lighthouse Museum

More about this marker. Although the marker is similar in shape, design, and color, it is not an Indiana state historical marker.

Additional commentary.
1. Marker History
According to the LaPorte County Historical Society, the marker was originally dedicated in 1966 and replaced on Memorial Day in 1983. The original description on the marker was: "Built on the water's edge, 1858 by the United States Government. One of the first lights on the Great Lakes. Harriet E. Colfax was the tender from 1853 to 1904. Remodeled 1904, electrified 1933, discontinued 1960."
— Submitted July 28, 2014, by Duane Hall of Abilene, Texas. 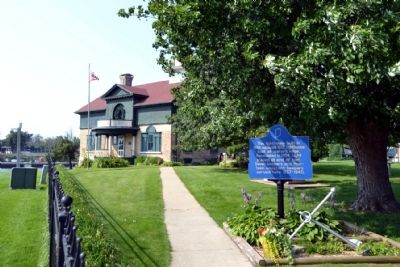 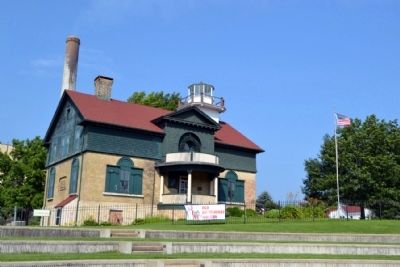