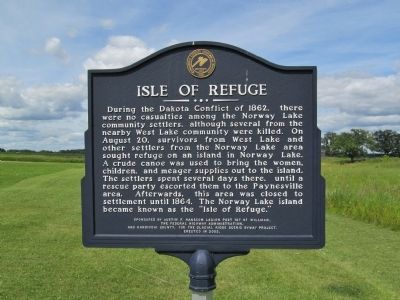 During the Dakota Conflict of 1862, there were no casualties among the Norway Lake community settlers, although several from the nearby West Lake community were killed. On August 20, survivors from West Lake and other settlers from the Norway Lake area sought refuge on an island in Norway Lake. A crude canoe was used to bring the women, children and meager supplies out to the island. The settlers spent several days there, until a rescue party escorted them to the Paynesville area. Afterwards, this area was closed to settlement until 1864. The Norway Lake island became known as the "Isle of Refuge."

Topics. This historical marker is listed in these topic lists: Settlements & Settlers 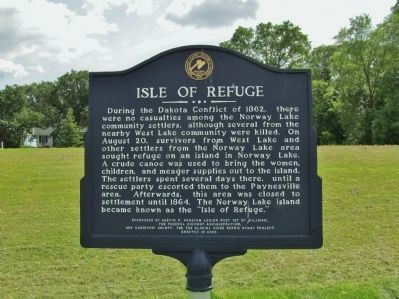 Photographed By K. Linzmeier, July 16, 2014
2. Isle of Refuge Marker
north side of marker with duplicate text

Click or scan to see
this page online
• Wars, US Indian. A significant historical year for this entry is 1862.

More about this marker. The marker has the Historic Site seal of the Kandiyohi County Historical Society · 1895.

Regarding Isle of Refuge. In August 1862, the Minnesota Dakota, also known by the French term, “Sioux," waged war against the United States following two years of unfulfilled treaty obligations. After attacking the Redwood (Lower Sioux) Agency, a remote government outpost, the Dakota moved with speed and surprise in southwestern Minnesota and 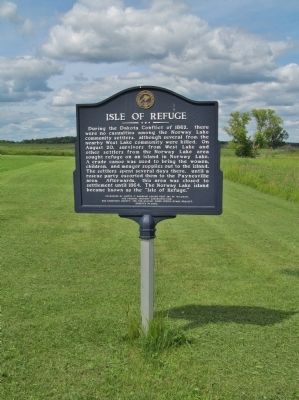 Photographed By K. Linzmeier, July 16, 2014
3. Isle of Refuge Marker
what was then eastern Dakota Territory, killing nearly everyone in their path. They killed approximately 800 settlers and soldiers, took many prisoners, and caused extensive property damage throughout the Minnesota River Valley.

2. Lonely Gravestone Tells of Pioneer's Fate: Johannes Iverson. (Submitted on July 29, 2014.)
3. 1862 Dakota War. "It was the largest Indian war in American history. The main battleground was the entire Minnesota River Valley in southern and central Minnesota. The uprising spread into the Dakota Territories and sent panic into Nebraska, Iowa and Wisconsin... To this day, [the] number of civilians killed on American soil as a result of hostile action is exceeded only by the attacks on 9/11." (Submitted on July 29, 2014.) 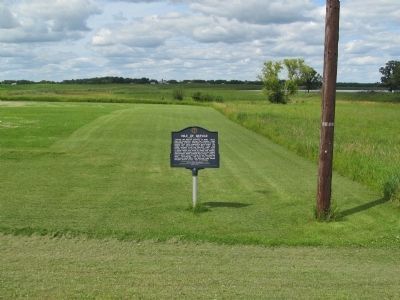