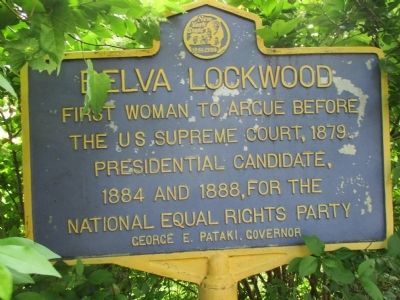 [on stone] , Near this spot stood the log cabin birthplace of Belva A. Bennett, 1830 - 1917. As Belva Lockwood, she became the first woman to practice law before the U.S. Supreme Court. She was also the first woman to run for the office of President of the United States in 1884 and 1888. Town of Royalton. . This historical marker was erected by George Pataki, Governor of New York; Town of Royalton. It is in Royalton in Niagara County New York

[on post]
First Woman to argue before the U S Supreme Court, 1879. Presidential candidate, 1884 and 1888, for the National Equal Rights party. George E. Pataki, Governor

[on stone]
Near this spot stood the log cabin birthplace of Belva A. Bennett, 1830 - 1917. As Belva Lockwood, she became the first woman to practice law before the U.S. Supreme Court. She was also the first woman to run for the office of President of the United States in 1884 and 1888. Town of Royalton.

Topics. This historical marker is listed in these topic lists: Civil Rights • Government & Politics. A significant historical year for this entry is 1879.

Location. 43° 10.059′ N, 78° 29.661′ W. Marker is in Royalton, New York, in Niagara County. Marker is on Griswold Street (County Route 905) half a mile south of Graham Road, on the right when traveling south. Markers are well hidden between two mature roadside trees. A nelpful white-on-green directional sign is opposite the markers. A twin 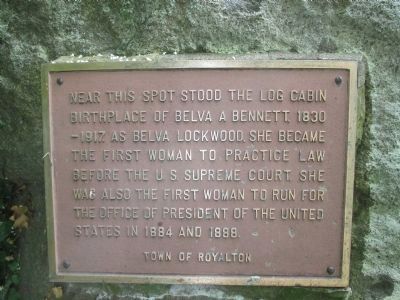 Click or scan to see
this page online
white-on-green sign is at the intersection of Griswold Street and Rochester Road (NY Route 31). Touch for map. Marker is in this post office area: Middleport NY 14105, United States of America. Touch for directions.

Related marker. Click here for another marker that is related to this marker. Academy attended by Belva Lockwood. 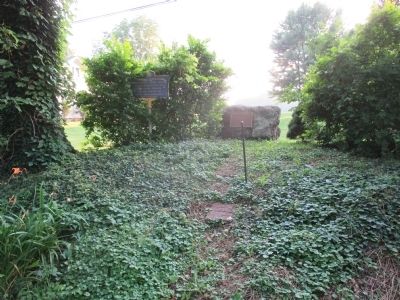 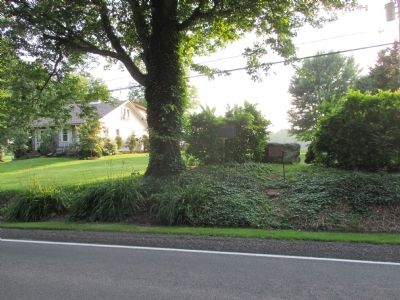 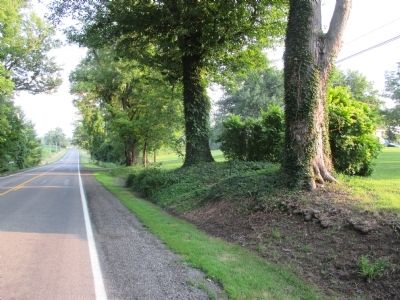 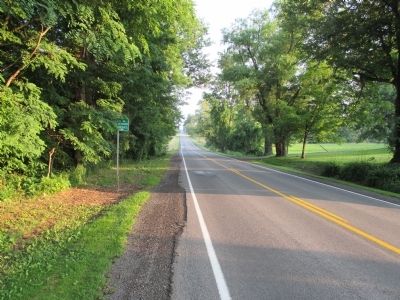 Photographed By Anton Schwarzmueller, July 20, 2014
6. Southward View Green Belva Lockwood Markers Sign
Look for this white-on-green directional sign on the left because the markers are not visible approaching at speed on the road. 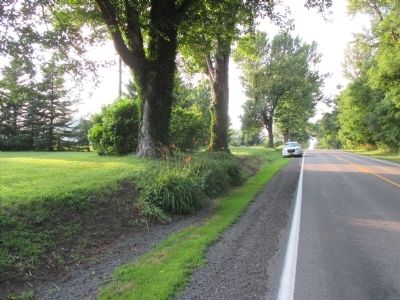 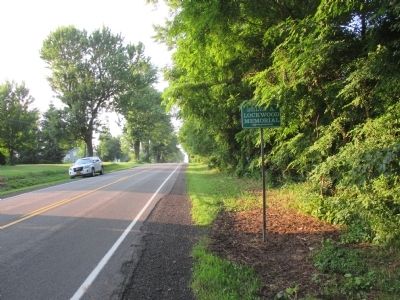 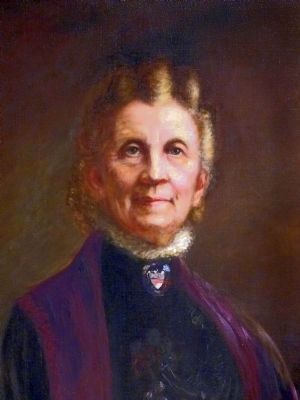 "Belva Ann Lockwood flatly rejected the gallantry of those who sought to protect women from the more rigorous aspects of life.Denied the right to teach physical education to her female pupils, Lokwood protested until that privilege was granted. Barred later from utilizing a hard-won law degree in many courts, she lobbied for a congressional bill permitting women to argue before the Supreme Court and, on its passage in 1879, became the first woman admitted to practice in that tribunal. In 1884 Lockwood realized that although she could not vote, she could seek public office. By late summer, before cheering supporters, she became the first woman to formally declare her candidacy for president. In this portrait Lockwood appears in robes presented to her in 1908 on receiving an honorary degree from her alma mater, Syracuse University." 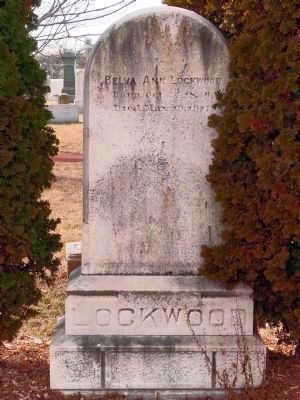 Photographed By Allen C. Browne, February 14, 2015
10. Belva Ann Lockwood
Born Oct. 24, 1830
Died May 19, 1817
Lockwood
Headstone in Congressional Cemetery, Washington, DC
“Born Belva Ann Bennett in Royalton, New York. At age 22 with a young daughter, Lura, Lockwood was widowed. She became a teacher and school principal and described herself as ‘an earnest, zealous laborer in the cause of Education, Sabbath School and Missionary work, and an indefatigable advocate of the Temperance Cause…’ At age 36, she came to Washington, DC ‘to see what was being done at this great political centre—this seething pot, to learn something of the practical workings of the machinery of government, and to see what the great men and women of the country felt and thought.’ She obtained a teaching position and spent her free time listening to the debates in Congress and the Supreme Court, which fostered a fascination with law and lawmaking. She married again, to Ezekiel Lockwood, and acted on her ambition to be a lawyer. By then she was already an established leader and a spokeswoman for the DC suffrage movement, and a lobbyist for women’s equal employment. After years of adversity, Lockwood was finally presented with her diploma and admitted to the DC bar in 1873. The first woman licensed to practice law, she was an ardent lobbyist for women’s rights and frequently argued before Congressional committees against sex discrimination. Her law practice in her own name survived for 40 years, and she managed to earn respect for her legal accomplishments. Despite her success, the number of female lawyers remained a small handful, a pattern which did not change until the mid-1970s. She fought to gain the right to present cases to federal courts, until finally the Senate passed the legislation which allowed her to present arguments before the U.S. Supreme Court. In 1884, she was the Presidential candidate for the Equal Rights Party. Her candidacy caused her business to decline. She relied on her pension from her husband’s death, lecture fees, and her tenants, supported not only herself but her widowed mother and the orphaned son who survived her daughter. Although she died in 1917 before seeing her dream fulfilled, Lockwood’s tireless efforts to gain women the right to vote had a profound impact on the creation of the 19th Amendment in 1920.” — Congressional Cemetery Educators, Agitators & Lawyers walking tour pamphlet.
Credits. This page was last revised on June 16, 2016. It was originally submitted on August 3, 2014, by Anton Schwarzmueller of Wilson, New York. This page has been viewed 716 times since then and 27 times this year. Photos:   1, 2, 3, 4, 5, 6, 7, 8. submitted on August 3, 2014, by Anton Schwarzmueller of Wilson, New York.   9, 10. submitted on March 24, 2015, by Allen C. Browne of Silver Spring, Maryland. • Bill Pfingsten was the editor who published this page.
Share this page.