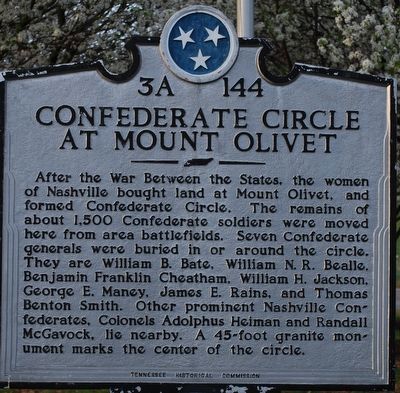 After the War Between the States, the women of Nashville bought land at Mount Olivet, and formed Confederate Circle. The remains of about 1,500 Confederate soldiers were moved here from area battlefields. Seven Confederate generals were buried in or around the circle. They are William B. Bate, William N.R. Bealle, Benjamin Franklin Cheatham, William H. Jackson, George E. Maney, James E. Rains, and Thomas Benton Smith. Other prominent Nashville Confederates, Colonels Adolphus Heiman and Randall McGavock, lie nearby. A 45-foot granite monument marks the center of the circle.

Topics and series. This historical marker is listed in these topic lists: Cemeteries & Burial Sites • War, US Civil. In addition, it is included in the Tennessee Historical Commission series list. 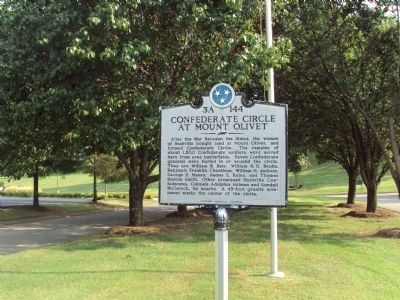 By Michael Manning, July 25, 2011
2. Confederate Circle at Mount Olivet Marker
Lane, on the right when traveling east. The marker is located at the entrance of the Mount Olivet Cemetery south of Lebanon Pike. Touch for map. Marker is at or near this postal address: 1101 Lebanon Pike, Nashville TN 37210, United States of America. Touch for directions. 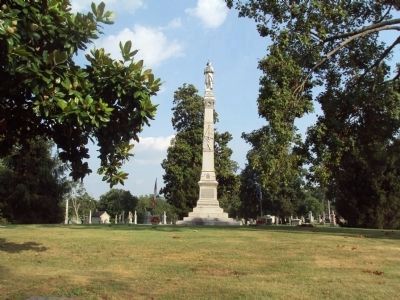 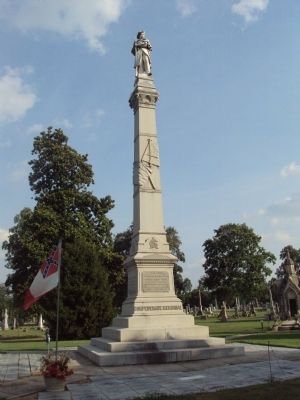