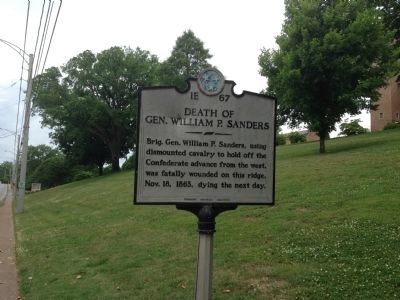 Brig. Gen. William P. Sanders, using dismounted cavalry to hold off the Confederate advance from the west, was fatally wounded on this ridge, Nov. 18, 1863, dying the next day.

Other nearby markers. At least 8 other markers are within 2 miles of this marker, measured as the crow flies. Longstreet's Headquarters (approx. 0.4 miles away); Bleak House (approx. 0.4 miles away); War Dog Memorial (approx. 0.6 miles away); 2111 Terrace Avenue (approx. 0.7 miles away); Fort Sanders U.D.C. Monument (approx. one mile away); The Assault Upon Fort Sanders (approx. one mile away); Fort Sanders (approx. 1.1 miles away); Confederate States of America Camp Van Dorn (approx. 1.1 miles away). Touch for a list and map of all markers in Knoxville.
Credits. This page was last revised on June 16, 2016. It was originally submitted on August 25, 2014, by Michael Manning of Woodlawn, Tennessee. This page has been viewed 481 times since then and 13 times this year. Photo   1. submitted on August 25, 2014, by Michael Manning of Woodlawn, Tennessee. • Bernard Fisher was the editor who published this page.
Share This Page.