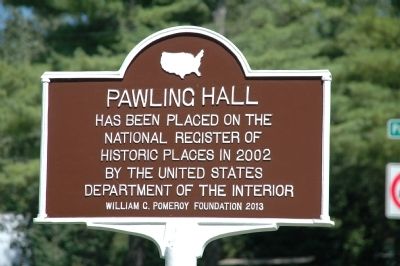 Has Been Placed on The
National Register of
Historic Places in 2002
By the United States
Department of the Interior
William G. Pomeroy Foundation 2013

Topics and series. This historical marker is listed in these topic lists: Industry & Commerce • Man-Made Features. In addition, it is included in the William G. Pomeroy Foundation series list. A significant historical year for this entry is 2002. 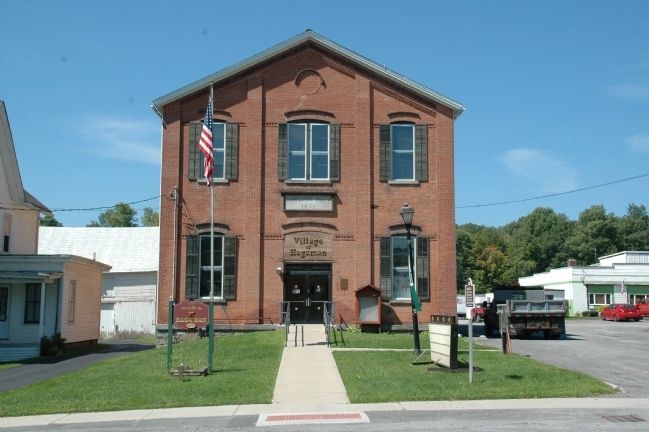 Click or scan to see
this page online
(approx. ¼ mile away); 18th Century Home (approx. 1.7 miles away); James Allin Inn (approx. 1.9 miles away); Hurricana Stock Farm (approx. 2.1 miles away). Touch for a list and map of all markers in Hagaman.

Regarding Pawling Hall. The community of Hagaman Mills developed during the nineteenth century as a local seat of water-powered industries along the Chuctanunda Creek. Pawling Hall was erected in 1891, a philanthropic gift from local mill owner Henry H. Pawling to his mill workers and the community. The Star, Anchor and Harrower textile mills, owned and operated by H. Pawling & Sons employed many inhabitants of Hagaman Mills. In 1972 the village of Hagaman purchased Pawling Hall for use as a village hall. Prior to that Kindergarten classes were held in the building during the 1950s. In 1938 the building was purchased by the Scattergood Grange No. 1514 for use as a Grange Hall.