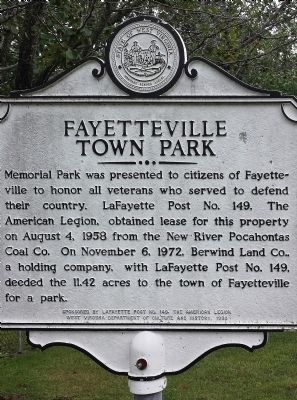 Memorial Park was presented to citizens of Fayetteville to honor all veterans who served to defend their country. LaFayette Post No. 149, The American Legion, obtained lease for this property on August 4, 1958 from the New River Pocahontas Coal Co. On November 6, 1972, Berwind Land Co., a holding company, with LaFayette Post No. 149, deeded the 11.42 acres to the town of Fayetteville for a park.

Erected 1990 by LaFayette Post No, 149, The American Legion
West Virginia Department of Culture and History.

Topics and series. This historical marker is listed in this topic list: Man-Made Features. In addition, it is included in the West Virginia Archives and History series list.

Other nearby markers. At least 8 other markers are within 2 miles of this marker 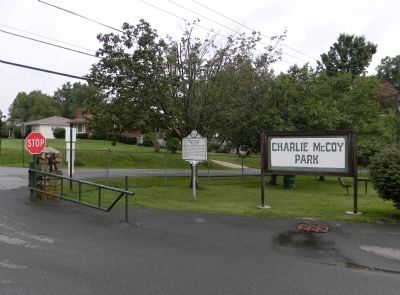