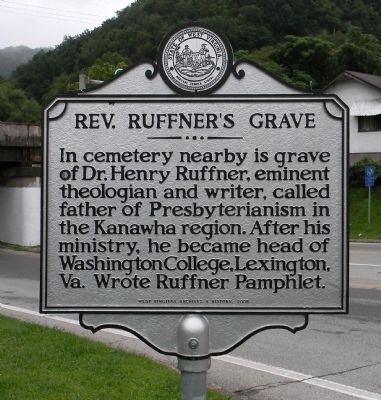 By PaulwC3, August 23, 2014
1. Rev. Ruffner's Grave Marker
Inscription.
Rev. Ruffner's Grave. . In cemetery nearby is grave of Dr. Henry Ruffner, eminent theologian and writer, called father of Presbyterianism in the Kanawha region. After his ministry, he became head of Washington College, Lexington, Va. Wrote Ruffner Pamphlet. . This historical marker was erected in 2009 by West Virginia Archives & History. It is in Malden in Kanawha County West Virginia

In cemetery nearby is grave of Dr. Henry Ruffner, eminent theologian and writer, called father of Presbyterianism in the Kanawha region. After his ministry, he became head of Washington College, Lexington, Va. Wrote Ruffner Pamphlet.

Topics and series. This historical marker is listed in these topic lists: Arts, Letters, Music • Cemeteries & Burial Sites • Churches & Religion • Education. In addition, it is included in the West Virginia Archives and History series list.

Location. 38° 18.051′ N, 81° 33.4′ W. Marker is in Malden, West Virginia, in Kanawha County. Marker is at the intersection of Georges Drive and Malden Drive (County Road 60/6), on the right when traveling west on Georges Drive. The marker is located at the Malden Volunteer Fire Department. Touch for map. Marker is at or near this postal address: 3924 Malden Drive, Charleston WV 25306, United States of America. Touch for directions.

Other nearby markers. At least 8 other markers are within 3 miles of this marker, measured as the crow flies. Ruffner Well (about 700 feet away, measured in a direct line); The Necessary Ingredient 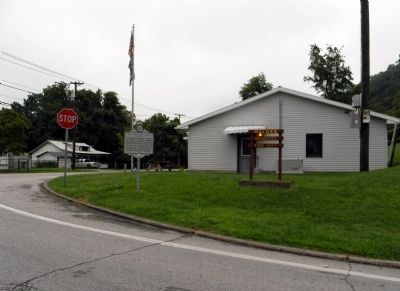 Also see . . .
1. e-WV | Henry Ruffner. Ruffner is best known for his controversial anti-slavery treatise, Address to the People of West Virginia (1847), more popularly known as the ‘‘Ruffner Pamphlet.’’ The Address argued for gradual emancipation not on moral grounds, but economic and social; slavery, Ruffner wrote, discouraged the growth of industry, agriculture, free labor, and education. (Submitted on September 4, 2014, by PaulwC3 of Northern, Virginia.)

Editor’s want-list for this marker. Photo of the Henry Ruffner Grave. • Can you help?
Share This Page.