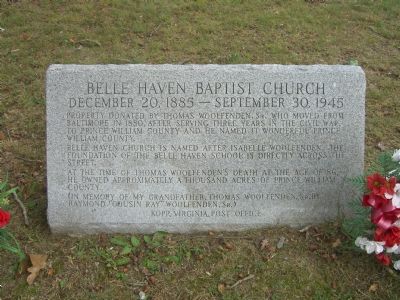 Belle Haven Church is named after Isabelle Woolfenden. The foundation of the Belle Haven School is directly across the street.

At the time of Thomas Woolfenden’s death at the age of 86, he owned approximately a thousand acres of Prince William County.

Topics. This historical marker is listed in these topic lists: Churches & Religion • Settlements & Settlers • War, US Civil. A significant historical date for this entry is September 30, 1752. 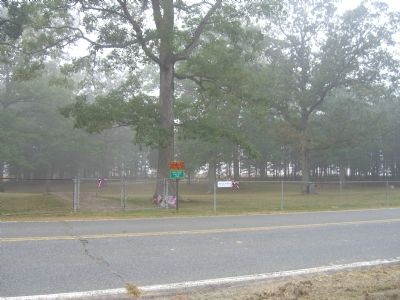 Click or scan to see
this page online
. Marker is in this post office area: Quantico VA 22134, United States of America. Touch for directions.

Regarding Belle Haven Baptist Church. Please note the photo #9 is out of date. The gravestone for Thomas Woolfenden, Sr. has been replaced with a newer stone showing his military service in the Union army, 8th Maryland Regiment, Infantry. Thomas is one of two Union veterans buried at Belle Haven. The other is Daniel H. Magee. You may find a photo of Thomas' new stone at: http://www.findagrave.com/cgi-bin/fg.cgi?page=pv&GRid=17277483&PIpi=89091515 .

Also see . . .  Additional information about the church and cemetery. According to the Virginia Historic Landmarks Commission survey form at this link, "the church, which parishioners had hoped to save, was demolished in 1946. In 1947 the cemetery was again made available for new burials, though the title of the land remains with the U.S. government." 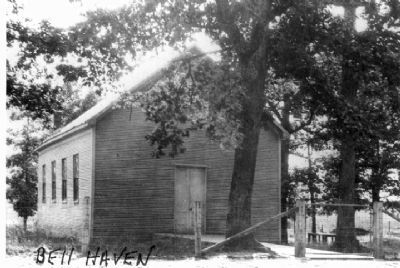 Additional information on these individuals may be found on their memorial pages at findagrave.com by searching cemeteries, Belle Haven, United States, Virginia, Prince William County. (Submitted on June 17, 2016, by Raynee Woolfenden of Fairfax, Virginia.)

Additional commentary.
1. Kopp, Virginia
The largest acquisition of land in Quantico MCB history took place in 1942 to meet World War II Marine Corps training requirements. Almost 51,000 acres of land west of U.S. Highway 1 were purchased in 1942 and became a permanent part of the base in 1943. Included in this land was the town of Kopp.

Kopp, located near the current town of Independent Hill on the western portion of the Marine Corps Base, began in 1885. Once home to about 100 local farming families, it consisted of, at one time, a country store, a school, post office, and the Bellehaven Baptist Church. 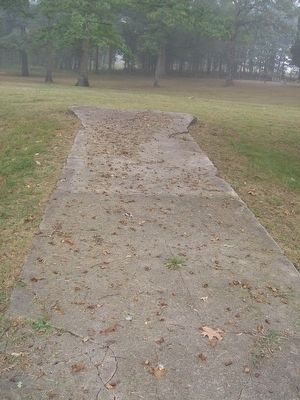 Photographed By Kevin W., October 8, 2007
4. Sidewalk leading up to where Belle Haven Baptist Church used to be.
Belle Haven Baptist Church was demolished about 1945. The cemetery on the grounds is one of about 33 cemeteries maintained by base personnel.
The sidewalk, according the the church records, was built in 1912, and is all that remains of the church today. (Source, Raynee Woolfenden of Fairfax, VA, submitted September 16, 2010).
As a result of the land purchase and subsequent incorporation into the Marine Corps Base, the town ceased to exist. All the buildings, including the church, were torn down. The cemetery, one of at least 33 large cemeteries aboard the base, is maintained by Marine Corps Base personnel.

The town of Kopp can still be located with internet mapping software.
— Submitted October 10, 2007, by Kevin W. of Stafford, Virginia.
2. Foundation of the Holmes School
On the foundation of Holmes School, someone has affixed a temporary marker with historical information about the founding of Holmes School. It reads:
Belle Haven Missionary Baptist church records:
In the fall of 1883 Mr. Luck and Mr. Morath moved a saw mill onto their recently bought land. Mr. W. B. Lynn wanted a school closer for his two girls. The public school system was getting underway in lower Prince William. Mr. Luck agreed to saw the lumbar free if the neighbors would bring the logs. Thus the Belle-Haven community took its first communal steps and shortly A tiny schoolhouse, crude but useful, appeared on a half acre of land given by Mr. and Mrs. M. G. Holmes. The neighbors celebrated its advent with a Christmas tree. The Christmas of 1884. The old foundations of the school are still there across 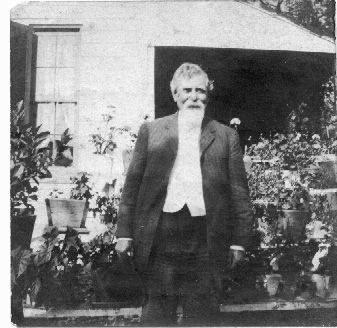 Photographed By Raynee Woolfenden, circa unknown
5. Rev. Andrew Jackson Cummings of the Belle Haven Missionary Baptist Church
This is a photo of Rev. Andrew Jackson Cummings. He served as pastor of the church from 1889 to December of 1914.
from Belle Haven Cemetery. After the school house was built they decided to hold church services there. There was a retired Methodist minister living about 2 1/2 miles south of the new schoolhouse, Mr. Lieber, who preached the first sermon at what was to be Belle-Haven Baptist Church.

The first warm spring Sunday afternoon of 1885, three young ladies went for a walk down the old Bellfair Mill Road from Ben Murphy's: Anna Dewitt Annie Murphy and Lizzie DeWitt. Recalling recent doings as girls have a way of doing Holmes School xmas tree came in for comment. Said one, "Why can't we have Sunday School and preaching in our new schoolhouse?" Again, W.B. Lynn rides into the picture and the girls put the proposition up to him. Sure the house was built by the people for the people, go ahead. But a minister? Mr. Lynn was sure Mr. Lieber a retire Methodist minister living about 2 1/2 or 3 miles south of the new schoolhouse would be glad to speak to them when he could. So the request was sent and Mr. Lieber preached the first sermon at what was to be Belle-Haven Baptist Church. W.B. Lynn's brother A. Lynn came to visit W.B. and heard of the little schoolhouse and what was being done around his birthplace. Fired with a zeal to tell the old, old story he made an appointment and began to preach regularly in the new school house. 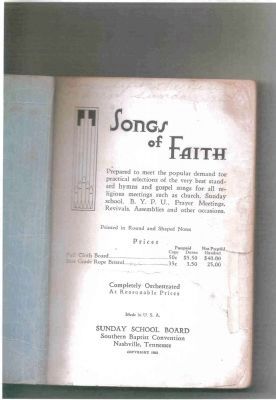 /s/
"Buck Jones"
— Submitted October 9, 2014, by Kevin W. of Stafford, Virginia.
3. Manassas and Dumfries Telephone Company
James Luck, Jr. and Mr. James Arthur Vetter founded the Manassas and Dumfries Telephone Company in the parlor of the home of Thomas and Isabelle Woolfenden on March 1, 1903. James Luck, Jr. was the son-in-law of Thomas and Isabelle. He married their daughter Sarah Catherine "Katie" Woolfenden on 24 Jan 1900 at the Belle Haven Church. This phone company later became Commonwealth Telephone before being purchased by GTE. The company has since changed hands a couple of more times.
— Submitted September 17, 2010, by Raynee Woolfenden of Fairfax, Virginia. 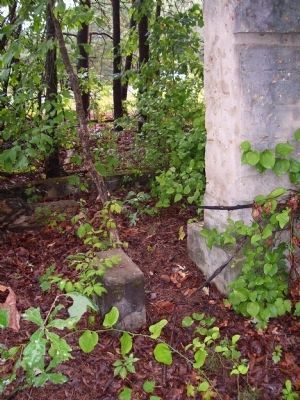 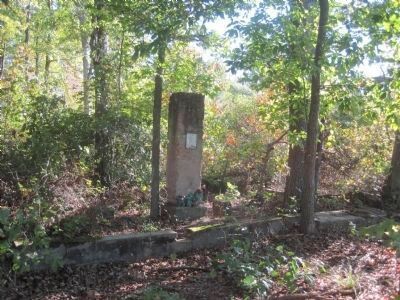 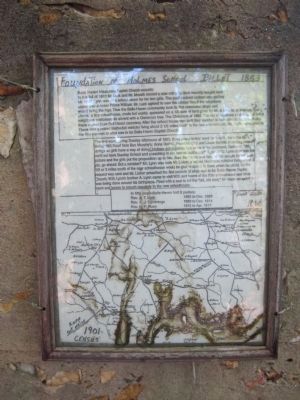 Photographed By Kevin W., October 8, 2014
9. Temporary Marker about Holmes School
See commentary for the text on this temporary marker. 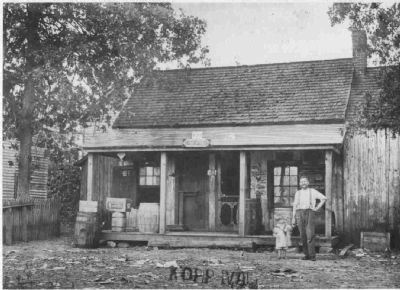 Photographed By Raynee Woolfenden, circa unknown
10. Kopp store and post office
This picture shows the old store and post office. It was west on the road from the church approximately 1/2 mile on the right. It is listed on the historic map of Prince William County as T. Lynn's store and Post Office. The map was made in 1992 by Eugene M. Scheel. 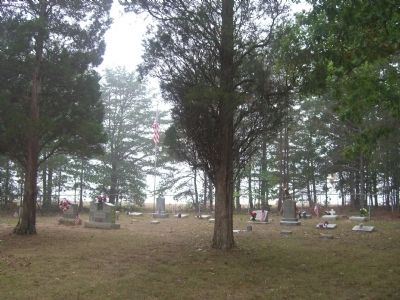 Photographed By Kevin W., October 8, 2007
11. The Wolfendens are interred in this corner of the Belle Haven Baptist Church Cemetery 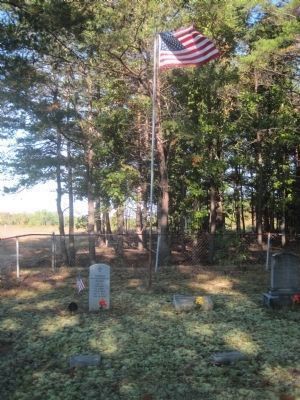 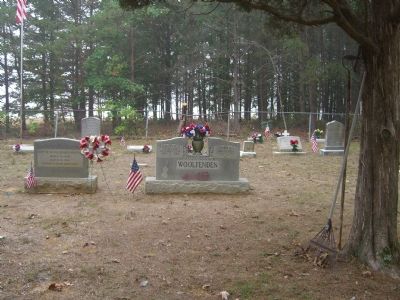