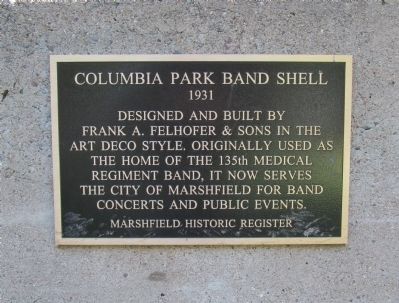 By K. Linzmeier, September 15, 2014
1. Columbia Park Band Shell Marker
Inscription.
Columbia Park Band Shell. , Designed and built by Frank A. Felhofer and Sons in the Art Deco style. Originally used as the home of the 135th Medical Regiment Band, it now serves the City of Marshfield for band concerts and public events. ,
Marshfield Historic Register. . This historical marker was erected in 2010 by the Marshfield Historic Preservation Committee. It is in Marshfield in Wood County Wisconsin

Designed and built by Frank A. Felhofer & Sons in the Art Deco style. Originally used as the home of the 135th Medical Regiment Band, it now serves the City of Marshfield for band concerts and public events.

Topics and series. This historical marker is listed in this topic list: Man-Made Features. In addition, it is included in the Art Deco series list.

Location. 44° 40.204′ N, 90° 10.47′ W. Marker is in Marshfield, Wisconsin, in Wood County. Marker can be reached from West Blodgett Street west of North Chestnut Avenue, on the left when traveling west. Marker is attached to the front right corner of the band shell in Columbia Park. Touch for map. Marker is at or near this postal address: 201 West Arnold Street, Marshfield WI 54449, United States of America. Touch for directions.

Other nearby markers. At least 8 other markers are within walking distance of this marker. Founder’s Square (about 600 feet away, measured in a direct line); Marshfield Post Office (approx. 0.3 miles away); Tower Hall (approx. 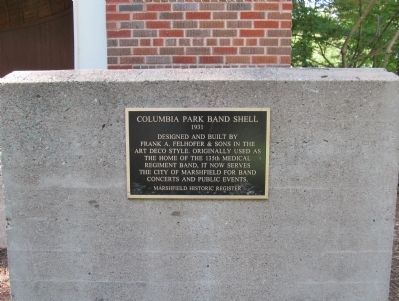 Also see . . .
1. Wisconsin Historical Society. National or State Registers Record. "The band stand is located in the city's oldest park, Columbia Park. The park consists of a full city block... The estate of Samuel Marsh donated this block in 1875 for use as a park." (Submitted on September 16, 2014.) 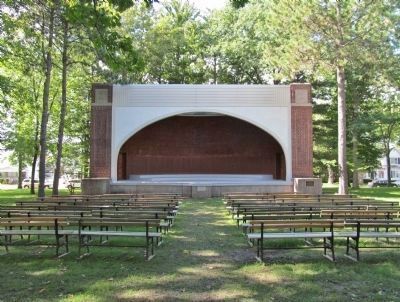