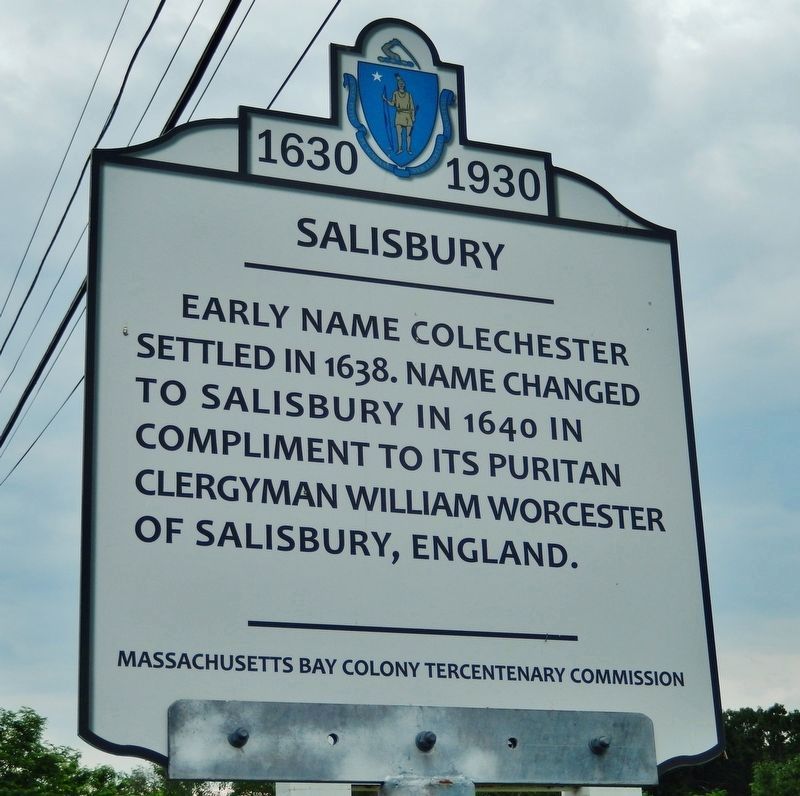 Photographed By Cosmos Mariner, June 23, 2017
1. Salisbury Marker
Inscription.
Salisbury. . , Early name Colchester settled in 1638. Name changed to Salisbury in 1640 in compliment to its Puritan clergyman William Worcester of Salisbury, England. . This historical marker was erected in 1930 by Massachusetts Bay Colony Tercentenary Commission. It is in Salisbury in Essex County Massachusetts

Early name Colchester settled in 1638. Name changed to Salisbury in 1640 in compliment to its Puritan clergyman William Worcester of Salisbury, England.

Topics and series. This historical marker is listed in these topic lists: Colonial Era • Settlements & Settlers. In addition, it is included in the Massachusetts Bay Colony—Tercentenary Commission Markers series list. A significant historical year for this entry is 1638. 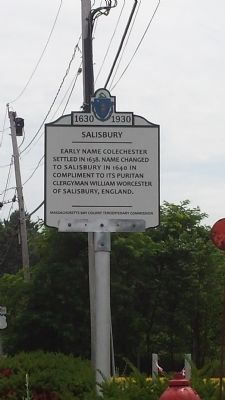 Also see . . .
1. History of Salisbury, Massachusetts.
Salisbury, Massachusetts is the northernmost town in Massachusetts. Salisbury was once the home of the Pennacook tribe of Native Americans. It is estimated that anywhere between 3,000-12,000 Pennacook lived in the surrounding Merrimack Valley area where they used the Merrimack River as their primary mode of transportation. The Pennacook established many hunting trails in Salisbury, which the colonists later turned into roads, such as Ferry Road, Seabrook Road and Elm Street. (Submitted on March 25, 2018, by Cosmos Mariner of Cape Canaveral, Florida.)