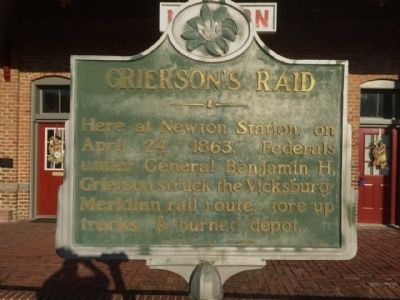 Photographed By Mark Hilton, September 14, 2014
1. Grierson's Raid Marker
Inscription.
Grierson's Raid. . , Here at Newton Station, on April. 24, 1863, Federals under General Benjamin H. Grierson struck the Vicksburg-Meridian rail route, tore up tracks, and burned depot. . This historical marker was erected in 1963 by the Mississippi Historical Commission.. It is in Newton in Newton County Mississippi

Erected 1963 by the Mississippi Historical Commission.

Topics and series. This historical marker is listed in these topic lists: Railroads & Streetcars • War, US Civil. In addition, it is included in the Mississippi State Historical Marker Program series list. A significant historical month for this entry is April 1861.

Location. 32° 19.226′ N, 89° 9.761′ W. Marker is in Newton, Mississippi, in Newton County. Marker can be reached from the intersection of South Main Street and East Railroad Street, on the left when traveling south. Touch for map. Marker is at or near this postal address: 128 South Main Street, Newton MS 39345, United States of America. Touch for directions.

Other nearby markers. At least 8 other markers are within 10 miles of this marker, measured as the crow flies. Newton County Blues (within shouting distance of this marker); Confederate Hospital (about 300 feet away, measured in a direct line); McElroy-Hoye House (approx. 0.2 miles away); Doolittle C.S.A. Cemetery 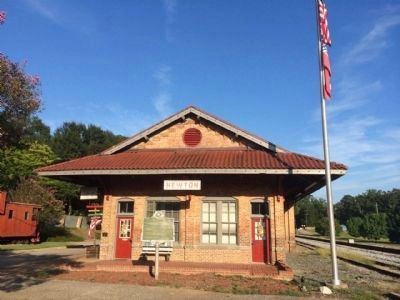 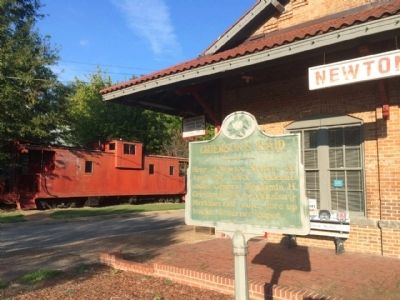