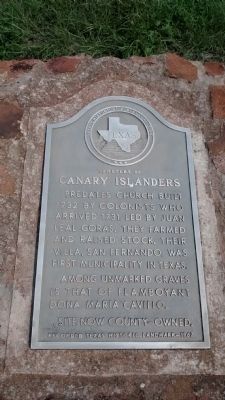 Predates church built 1732 by colonists who arrived 1731, led by Juan Leal Goras. They farmed and raised stock. Their villa, San Fernando, was first municipality in Texas.

Among unmarked graves is that of flamboyant Dona Maria Cavillo.

Topics. This historical marker is listed in these topic lists: Cemeteries & Burial Sites • Hispanic Americans • Settlements & Settlers. A significant historical year for this entry is 1732.

Other nearby markers. At least 8 other markers are within one mile of this marker, measured as the crow flies. Floresville United Methodist Church (approx. 0.9 miles away); First Baptist Church of Floresville (approx. 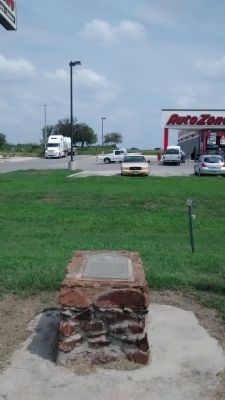 Photographed By Richard Denney, September 22, 2014
2. Cemetery of Canary Islanders Marker
Cemetery is behind and to the left of Auto Zone in this photo.

Related marker. Click here for another marker that is related to this marker. Dona (Doña) Maria Cavillo referenced on the marker (also known as Dona Maria del Carmen) managed the ranch that was located at the former site known as Mision de las Cabras.

Additional commentary.
1.
Dona Maria Cavillo referenced on the marker is variously referred to as Maria del Carmen Calvillo (Calvillo vs. Cavillo on marker), and Dona Maria del Carmen. Note To Editor only visible by Contributor and editor