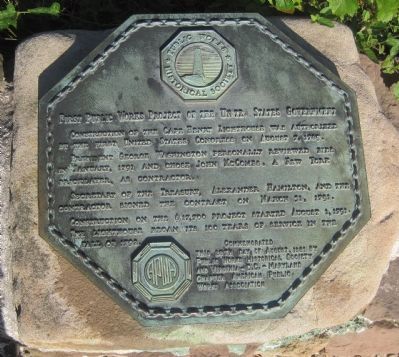 Construction of the Cape Henry Lighthouse was authorized by the First United States Congress on August 7, 1789.

Topics and series. This historical marker is listed in these topic lists: Labor Unions • Waterways & Vessels. In addition, it is included in the Lighthouses series list. A significant historical month for this entry is January 1791. 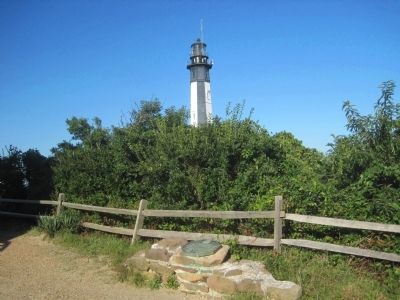 By Kevin W., September 27, 2014
2. First Public Works Project of the United States Government Marker
The new Cape Henry Lighthouse can be seen in the background.

Click or scan to see
this page online
in Fort Story in Virginia Beach, Virginia. Marker is on Atlantic Avenue near Cape Henry Road. Located within Joint Expeditionary Base East, formerly Fort Story. Touch for map. Marker is in this post office area: Virginia Beach VA 23459, United States of America. Touch for directions.

Also see . . .
1. Public Works Historical Society. "The lighthouse stands today as a historical monument not only to our nation's heritage, but also to the timelessness of public works." (Submitted on September 30, 2014, by Kevin W. of Stafford, Virginia.)