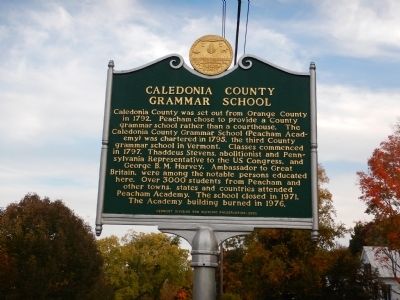 Caledonia County was set out from Orange County in 1792. Peacham chose to provide a County grammar school rather than a courthouse. The Caledonia County Grammar School (Peacham Academy) was chartered in 1795, the third County grammar school in Vermont. Classes commenced in 1797. Thaddeus Stevens, abolitionist and Pennsylvania Representative to the US Congress, and George B.M. Harvey, Ambassador to Great Britain, were among the notable persons educated here. Over 3000 students from Peacham and other towns, states and countries attended Peacham Academy. The school closed in 1971. The Academy building burned in 1976.

Topics. This historical marker is listed in this topic list: Education. A significant historical year for this entry is 1792.

Other nearby markers. At least 8 other markers are within 7 miles of this marker, measured as the 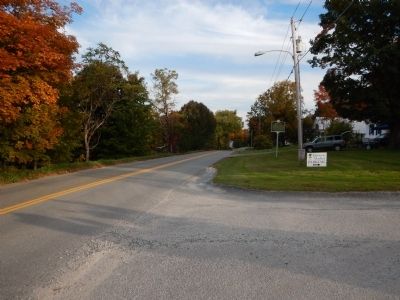 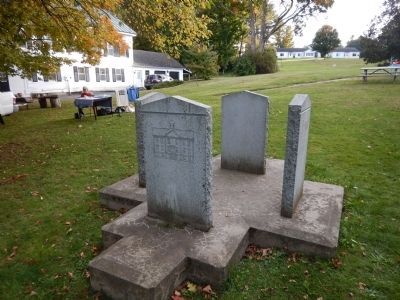 Photographed By Kevin Craft, September 25, 2014
3. Caledonia County Grammar School Marker
This granite marker indicates the location of the school and each façade is engraved with an image of the school 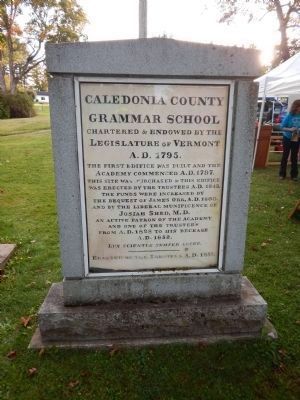 Photographed By Kevin Craft, September 25, 2014
4. Caledonia County Grammar School
Chartered & endowed by the
Legislature of Vermont
A.D.1795.
The first edifice was built and the
Academy commenced A.D.1797.
This site was purchased & this edifice
was erected by the trustees A.D.1843.
The funds were increased by
the bequest of James Orr, A.D.1800.
And by the liberal munificence of
Josiah Shed, M.D.
an active patron of the Academy
and one of the trustees
from A.D.1828 to his decease
A.D.1852.
Lux Scientie Semper Lucet
Erected by the trustees A.D.1853
Credits. This page was last revised on August 29, 2016. It was originally submitted on October 4, 2014, by Kevin Craft of Bedford, Quebec. This page has been viewed 457 times since then and 32 times this year. Photos:   1, 2, 3, 4. submitted on October 4, 2014, by Kevin Craft of Bedford, Quebec. • Bill Pfingsten was the editor who published this page.
Share this page.