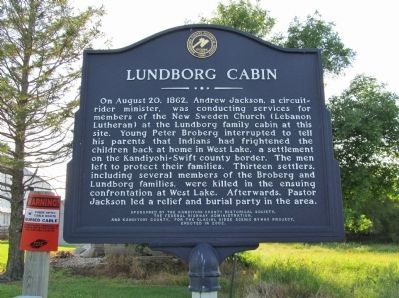 On August 20, 1862, Andrew Jackson, a circuit-rider minister, was conducting services for members of the New Sweden Church (Lebanon Lutheran) at the Lundborg family cabin at this site. Young Peter Broberg interrupted to tell his parents that Indians had frightened the children back at home in West Lake, a settlement on the Kandiyohi-Swift county border. The men left to protect their families. Thirteen settlers, including several members of the Broberg and Lundborg families, were killed in the ensuing confrontation at West Lake. Afterwards, Pastor Jackson led a relief and burial party in the area.


Sponsored by the Kandiyohi County Historical Society,
the Federal Highway Administration,
and Kandiyohi County, for the Glacial Ridge Scenic Byway Project.
Erected in 2002.

Topics and series. This historical marker is listed in these topic lists: Churches & Religion 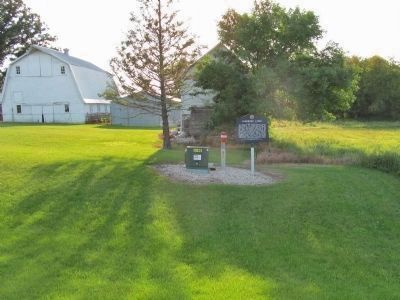 Photographed By K. Linzmeier, August 27, 2014
2. Lundborg Cabin Marker
Site of the Lundborg Cabin
(The Broberg cabin was 2 miles beyond the marker.)

Click or scan to see
this page online
• Settlements & Settlers • Wars, US Indian. In addition, it is included in the Former U.S. Presidents: #07 Andrew Jackson series list. A significant historical year for this entry is 1862.

More about this marker. The marker has the Historic Site seal of the Kandiyohi County Historical Society · 1895.
In August 1862, the Minnesota Dakota, also known by the French term, “Sioux," waged war against the United States following two years of unfulfilled treaty obligations. After attacking the Redwood (Lower Sioux) Agency, a remote government outpost, the Dakota moved with speed and surprise in southwestern Minnesota and what was then eastern Dakota Territory, killing nearly everyone in their path. They killed approximately 800 settlers and soldiers, took many prisoners, and caused extensive property damage throughout the Minnesota River Valley.

Regarding Lundborg Cabin. As the settlers left the Lundborg cabin, Rev. Jackson cautioned them not to provoke the Dakota; West Lake settlers were unaware of the uprising that started a few days earlier. When the settlers returned to West Lake (today called Monson Lake), there was nothing to indicate hostility — the Dakota appeared to be a hunting party such as they had been accustomed to see. But, at some prearranged signal, the Dakota opened fire.
source: Year-book of the Swedish Historical Society of America, 1922