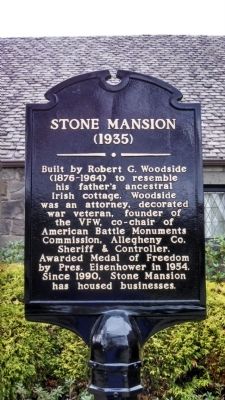 Topics and series. This historical marker is listed in these topic lists: Architecture • Fraternal or Sororal Organizations • Law Enforcement. In addition, it is included in the Former U.S. Presidents: #34 Dwight D. Eisenhower series list. A significant historical year for this entry is 1954.

Location. 40° 36.7′ N, 80° 6.273′ W. Marker is in Franklin Park, Pennsylvania, in Allegheny County. Marker can be reached from the intersection of Wexford Bayne Road and Stone Mansion Drive, on the right when traveling west. Touch for map. Marker is at or near this postal address: 1600 Stone Mansion Dr, Sewickley PA 15143, United States of America. Touch for directions.

Other nearby markers. At least 8 other markers are within 4 miles of this marker, measured as the crow flies. A different marker also named Stone Mansion (within shouting distance of this marker); Kuskusky Path 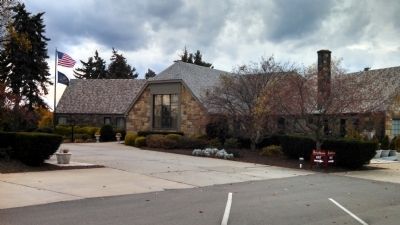