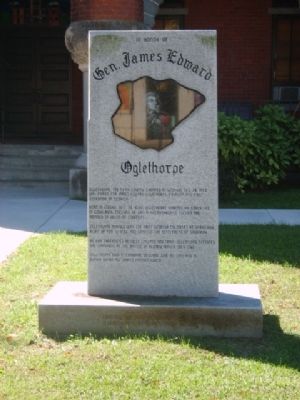 Oglethorpe, the fifth county created in Georgia, Dec. 19, 1793 was named for James Edward Oglethorpe, founder and first governor of Georgia.

Born in London, Dec. 22, 1696, Oglethorpe started his early life in Godalming, England. He was a philanthropist, soldier and member of house of commons.

Oglethorpe arrived with the first Georgia colonists at Yamacraw Bluff on Feb. 12, 1733, and started the settlement of Savannah. As war threatened between England and Spain, Oglethorpe defeated the Spaniards at the Battle of Bloody Marsh, July 1742.

Oglethorpe died in Cranham, England June 30, 1785 and is buried within All Saints Parish church.

Topics. This historical marker is listed in these topic lists: Cemeteries & Burial Sites • Colonial Era • Settlements & Settlers. A significant historical date for this entry is June 30, 1887. 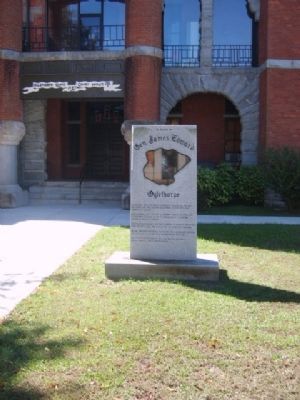 Click or scan to see
this page online
Marker is at or near this postal address: 111 West Main Street, Lexington GA 30648, United States of America. Touch for directions. 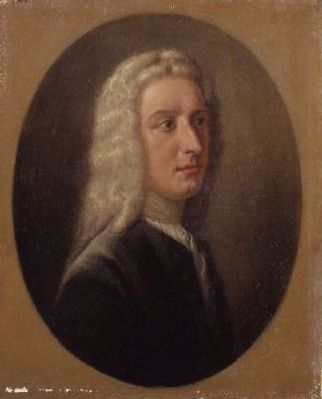 3. Battle of Bloody Marsh. Wikipedia entry:
The Battle of Bloody Marsh took place on July 18, 1742 between Spanish and British forces on St. Simons Island, part of the Province of Georgia, resulting in a victory for the British. Part of a much larger conflict known as the War of Jenkins' Ear, the battle was for the British fortifications of Fort Frederica and Fort St. Simons, with the strategic goal the sea routes and inland waters they controlled. (Submitted on October 23, 2014, by Brian Scott of Anderson, South Carolina.)

4. Battle of Bloody Marsh. New Georgia Encyclopedia entry:
On July 7, 1742, English and Spanish forces skirmished on St. Simons Island in an encounter later known as the Battle of Bloody Marsh. Once formal hostilities began in 1739 between the Spanish and English over the land between South Carolina and Florida, shipping on the Atlantic Ocean suffered frequent interruption from acts of piracy by both sides. These skirmishes escalated into the War of Jenkins' Ear and the Battle of Bloody Marsh. This event was the only Spanish attempt to invade Georgia during the War of Jenkins' Ear, and it resulted in a significant English victory. (Submitted on October 23, 2014, by Brian Scott of Anderson, South Carolina.)