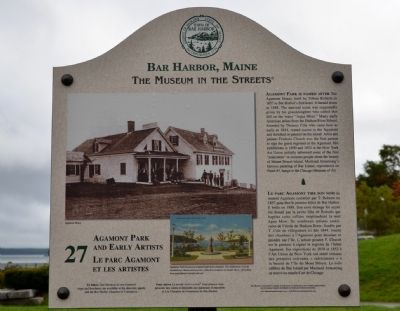 By Karl Stelly, October 5, 2014
1. Agamont Park Marker
Inscription.
Agamont Park is named after the Agamont House, built by Tobias Roberts in 1857 as Bar Harbor's first hotel. It burned down in 1888. The unusual name was supposedly given by his granddaughter who called this hill on the water "Aqua Mont." Many early American artists from the Hudson River School, founded by Thomas Cole who came here as early as 1844, rented rooms in the Agamont and sketched or painted on the island. Artist and painter Frederic Church was the first person to sign the guest registers at the Agamont. His exhibitions in 1850 and 1852 at the New York Art Union initially informed some of the first "rusticators" or summer people about the beauty of Mount Desert Island. Maitland Armstrong's famous painting of Bar Island, reproduced on Panel #3, hangs in the Chicago Museum of Art.

[French Translation:] , . This historical marker was erected in 2013 by The Museum in the Streets. It is in Bar Harbor in Hancock County Maine