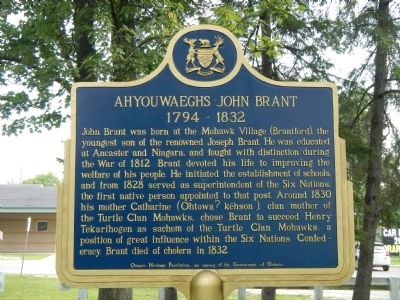 English
John Brant was born in the Mohawk Village (Brantford), the youngest son of the renowned Joseph Brant. He was educated at Ancaster and Niagara, and fought with distinction during the War of 1812. Brant devoted his life to improving the welfare of his people. He initiated the establishment of schools ad from 1828 served as superintendent of the Six Nations, the first native person appointed to that post. Around 1830 his mother Catharine (Ohtowa? kéhson), clan mother of the Turtle Clan Mohawks, chose Brant to succeed Henry Tekarihogen as sachem of the Turtle Clan Mohawks, a position of great influence within the Six Nations Confederacy. Brant died of cholera in 1832. 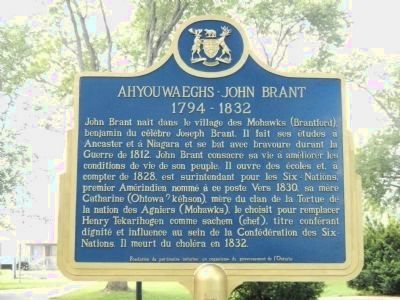 Topics. This historical marker is listed in these topic lists: Native Americans • War of 1812. A significant historical year for this entry is 1812.

Location. 43° 4.162′ N, 80° 7.11′ W. Marker is in Ossweken, Ontario, in Brant County. Marker can be reached from the intersection of Fourth Line Road and Chiefswood Road, on the left when traveling east. Touch for map. Marker is at or near this postal address: 1738 Fourth Line Road, Ossweken ON N0A, Canada. Touch for directions.

More about this marker. This marker is located in the Six Nations Veterans Memorial Park. 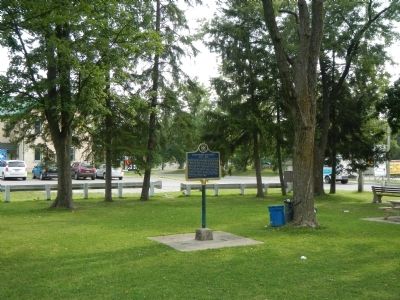 Photographed By Barry Swackhamer, August 11, 2014
3. Ahyouwaeghs - John Brant Marker
In the War of 1812, Brant and John Norton led native warriors to stop an American attack at the Battle of Queenston Heights in October 1812. He was made a lieutenant in the Indian Department and was involved in several battles throughout the war. (Submitted on October 27, 2014, by Barry Swackhamer of Brentwood, California.) 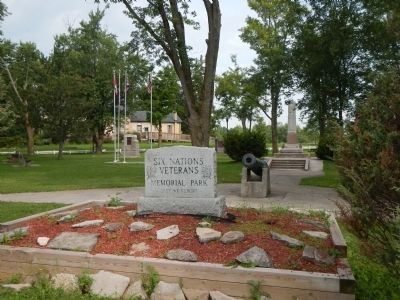 Photographed By Barry Swackhamer, August 11, 2014
4. Six Nations Veterans Memorial Park.
The marker is in the back. 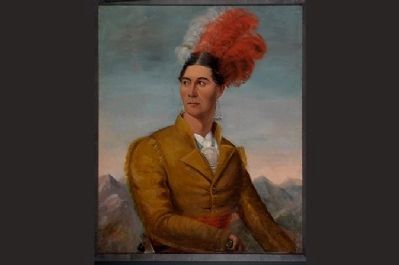