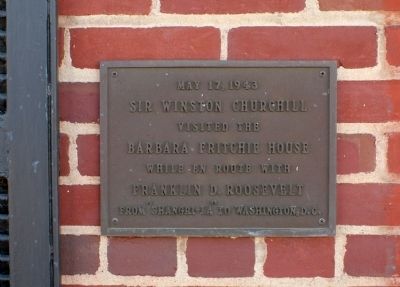 Photographed By Christopher Busta-Peck, March 2, 2008
1. May 17, 1943 Marker
Inscription.
May 17, 1943. . Sir Winston Churchill visited the Barbara Fritchie House while en route with Franklin D. Roosevelt from "Shangri-la" to Washington, D.C. . This historical marker was erected in 1954 by The Historical Society of Frederick County. It is in Frederick in Frederick County Maryland

Erected 1954 by The Historical Society of Frederick County.

Topics and series. This historical marker is listed in these topic lists: Notable Buildings • War, World II. In addition, it is included in the Former U.S. Presidents: #32 Franklin D. Roosevelt series list. A significant historical date for this entry is May 17, 1843. 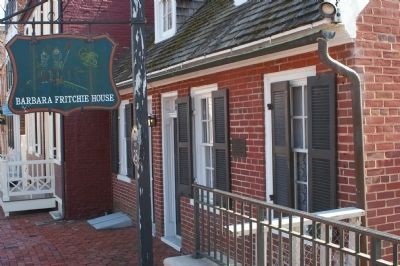 Additional commentary.
1. Eleanor Roosevelt remembers
"[O]n one occasion I drove down in the car with them [Winston Churchill and Franklin Roosevelt] to Shangri-La. This was a retreat which had been set up for my husband for weekends in the warm weather when he could not go far away. We drove through the town of Frederick, Maryland, and Franklin pointed to a window and said it was the window from which Barbara Fritchie had hung the Union colors. Mr. Churchill then recited the whole of the Barbara Fritchie poem. My husband and I looked at each other, for each of us could have quoted a few lines, but the whole was quite beyond us! Franklin happened to be fond of Edward Lear's Nonsense Rhymes, and I can remember Mr. Churchill capping every rhyme my husband quoted. How long they could have gone on, I don't know, but fortunately a turn in the road brought an end to this particular amusement." -- Eleanor Roosevelt , The Atlantic, March, 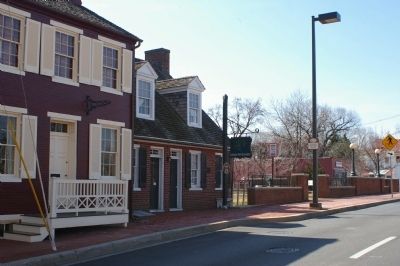