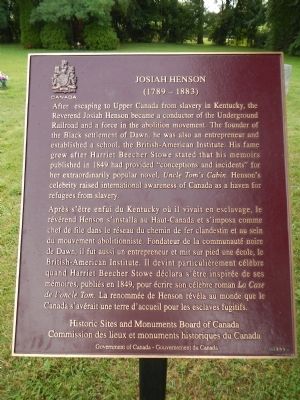 Photographed By Barry Swackhamer, August 12, 2014
1. Josiah Henson Marker
Inscription.
After escaping to Upper Canada from slavery in Kentucky, the Reverend Josiah Henson became a conductor of the Underground Railroad and a force in the abolition movement. The founder of the Black settlement of Dawn, he was also an entrepreneur and established a school, the British-American Institute. His fame grew after Harriet Beecher Stowe stated that his memoirs published in 1849 had provided “conceptions and incidents” for her extraordinarily popular novel, Uncle Tom’s Cabin. Henson’s celebrity raised international awareness of Canada as a haven for refugees from slavery., French , . This historical marker was erected in 1999 by Historic Sites and Monument Board of Canada/Commission de lieux et monuments historique du Canada. It is in Dresden in Chatham-Kent Ontario