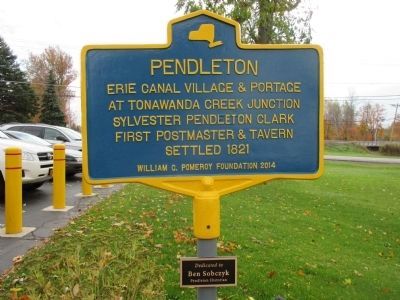 Photographed By Anton Schwarzmueller, October 20, 2014
1. Pendleton Marker
Notice the raised letters misspelling Pendleton at center and corrected by the paint. A donation sign is on the pole below the marker. The bridge at right is East Canal Road over Tonawanda Creek into Erie County. The creek will merge with the Erie Barge Canal a very short distance to the west from here.
Inscription.
Pendleton. .
Erie Canal village and portage at Tonawanda Creek junction Sylvester Pendleton Clark first Postmaster and tavern settled 1821 . . This historical marker was erected in 2014 by William G. Pomeroy Foundation. It is in Pendleton in Niagara County New York

Topics and series. This historical marker is listed in these topic lists: Settlements & Settlers • Waterways & Vessels. In addition, it is included in the Erie Canal, and the William G. Pomeroy Foundation series lists. A significant historical year for this entry is 1821.

Location. 43° 5.23′ N, 78° 43.697′ W. Marker is in Pendleton, New York, in Niagara County. Marker is on Washington Street near East Canal Road, on the left when traveling west. North Tonawanda Creek Road is also part of the intersection. Touch for map. Marker is at or near this postal address: 7030 Washington Street, Lockport NY 14094, United States of America. Touch for directions. 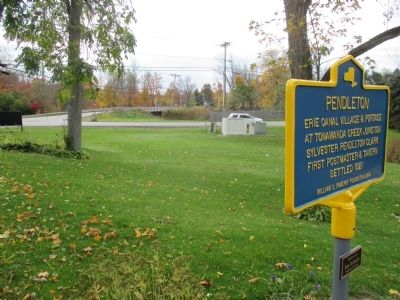 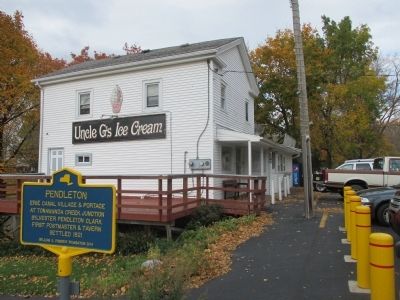