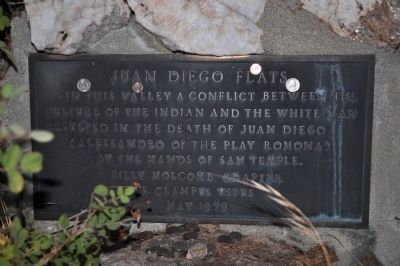 Photographed By Michael Kindig, September 11, 2010
1. Juan Diego Flats Marker
Inscription.
Juan Diego Flats. . In this valley a conflict between the culture of the Indian and the white man resulted in the death of Juan Diego (Alessandro of the play Romona) by the hands of Sam Temple. . This historical marker was erected in 1979 by Billy Holcomb Chapter No. 1069, E Clampus Vitus. It is Near Anza in Riverside County California

In this valley a conflict between the culture of the Indian and the white man resulted in the death of Juan Diego (Alessandro of the play Romona) by the hands of Sam Temple.

Topics and series. This historical marker is listed in these topic lists: Arts, Letters, Music • Hispanic Americans • Native Americans • Settlements & Settlers. In addition, it is included in the E Clampus Vitus series list.

Location. 33° 35.657′ N, 116° 48.146′ W. Marker is near Anza, California, in Riverside County. Marker is on Juan Diego Flats Road, on the right when traveling east. Marker is located on Forest Service land in the San Bernardino National Forest. Touch for map. Marker is in this post office area: Anza CA 92539, United States of America. Touch for directions.

Other nearby markers. At least 8 other markers are within 13 miles of this marker, measured as the crow flies. Hamilton School, Anza (approx. 7.8 miles away); Historic Lake Hemet Dam (approx. 9 miles away); Kenworthy 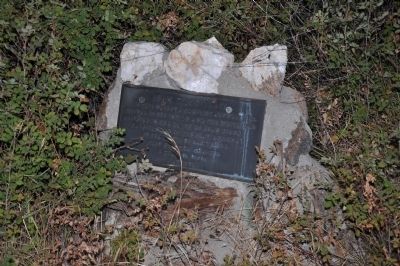 Regarding Juan Diego Flats. Juan Diego and his wife were Mountain Cahuilla Indians who lived in this little valley near Bautista Creek. They had an adobe house and Juan Diego often took work at the town of San Jacinto. Considered by many to be "crazy," never dangerous, one day he mistakenly rode another man's horse home. That man confronted Juan Diego at his adobe for this mistake and shot him to death in front of his wife.
SOURCE: Billy Holcomb Chapter 1069 35th Anniversary Plaque Book by Phillip Holdaway 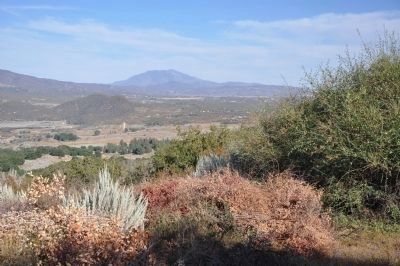 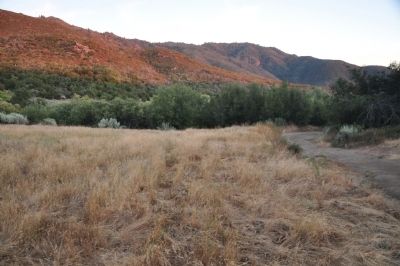