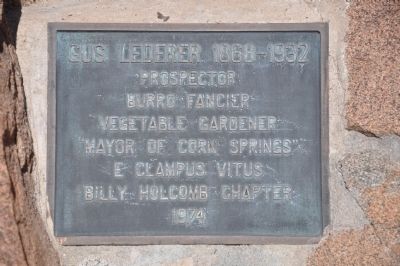 Topics and series. This historical marker is listed in these topic lists: Agriculture • Horticulture & Forestry • Settlements & Settlers. In addition, it is included in the E Clampus Vitus series list.

Location. 33° 37.5′ N, 115° 19.368′ W. Marker is near Desert Center, California, in Riverside County. Marker is on Corn Springs Road near Interstate 10, on the right when traveling west. From the beginning of the dirt road it is 6.9 miles to the marker which is mounted on a rock next to the road and is easily missed. Touch for map. Marker is in this post office area: Desert Center CA 92239, United States of America. Touch for directions.

Other nearby markers. At least 1 other marker is within walking distance of this marker. Corn Springs (about 300 feet away, measured in a direct line). 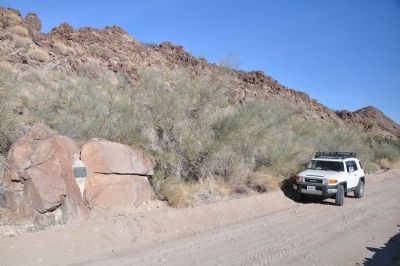