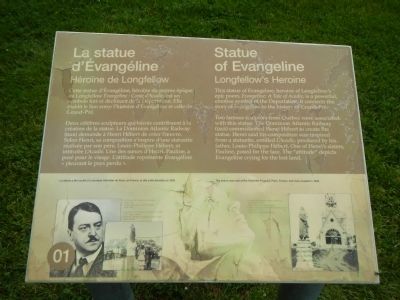 English
This statue of Evangeline, heroine of Longfellow’s epic poem, Evangeline: A Tale of Acadie, is a powerful emotive symbol of the Deportation. It connects the story of Evangeline to the history of Grand Prê.

Two famous sculptors from Quebec were associated with this statue. The Dominion Atlantic Railway (DAR) commissioned Henri Hébert to create the statue. Henri said his composition was inspired from a statuette, entitled L’Acadie, produced by his father, Louis-Philippe Hébert. One of Henri’s sisters, Pauline, posed for the face. The “attitude” depicts Evangeline crying for the lost land.