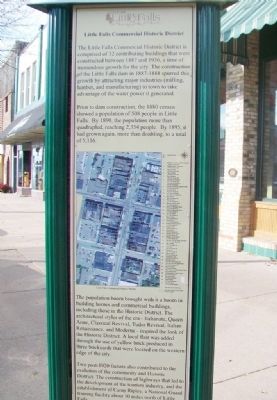 The Little Falls Commercial Historic District is comprised of 32 contributing buildings that were constructed between 1887 and 1936, a time of tremendous growth for the city. The construction of the Little Falls dam in 1887-1888 spurred this growth by attracting major industries (milling, lumber, and manufacturing) to town to take advantage of the water power it generated.

The population boom brought with it a boom in building homes and commercial buildings, including those in the Historic District. The architectural styles of the era - Italianate, Queen Anne, Classical Revival, Tudor Revival, Italian Renaissance, and Moderne - inspired the look of the Historic District. A local flair was added through the use of yellow brick produced in three brickyards that were located on the western edge of the city. 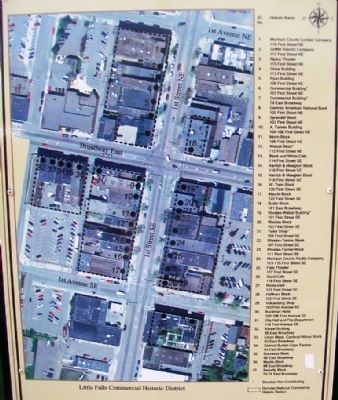 Click or scan to see
this page online
also contributed to the evolution of the community and Historic District: The construction of highways that led to the development of the tourism industry, and the establishment of Camp Ripley, a National Guard training facility about 10 miles north of Little Falls.

In addition, the City of Little Falls has 8 other properties on the National Register.

Little Falls Dam
The construction of the Little Falls Dam in 1887-1888 brought immediate improvements to the city. In addition to creating jobs, the dam and power plant provided the city's residential and commercial areas with an excellent lighting system and water supply.

City Hall & Courthouse
Little Falls was initially platted in 1855, was organized as a village in 1879, and was 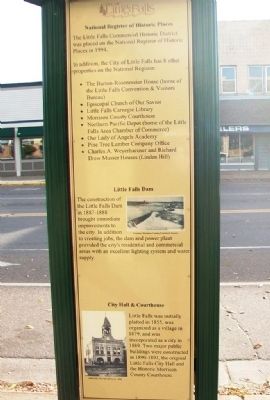 Bank Square
The intersection of East Broadway and First Street within the Little Falls Commercial Historic District became the city's financial center and was known as "Bank Square." The Morrison County Bank, founded circa 1881, was located in the southwestern corner of the intersection. It eventually became known as the German American National Bank.

The First National Bank was organized in 1888 and in 1891 was housed in the newly-completed Butler Block, located in the northwestern corner of the intersection.

Buckman Hotel
The Historic District served as a social and cultural focal point for the community as buildings such as the Buckman Hotel housed numerous social gatherings.

Erected by City of Little Falls.

Topics. This historical marker is listed in these topic lists: Industry & Commerce • Settlements & Settlers • Waterways & Vessels. A significant historical year for this entry is 1887. 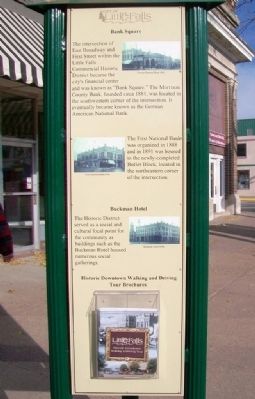