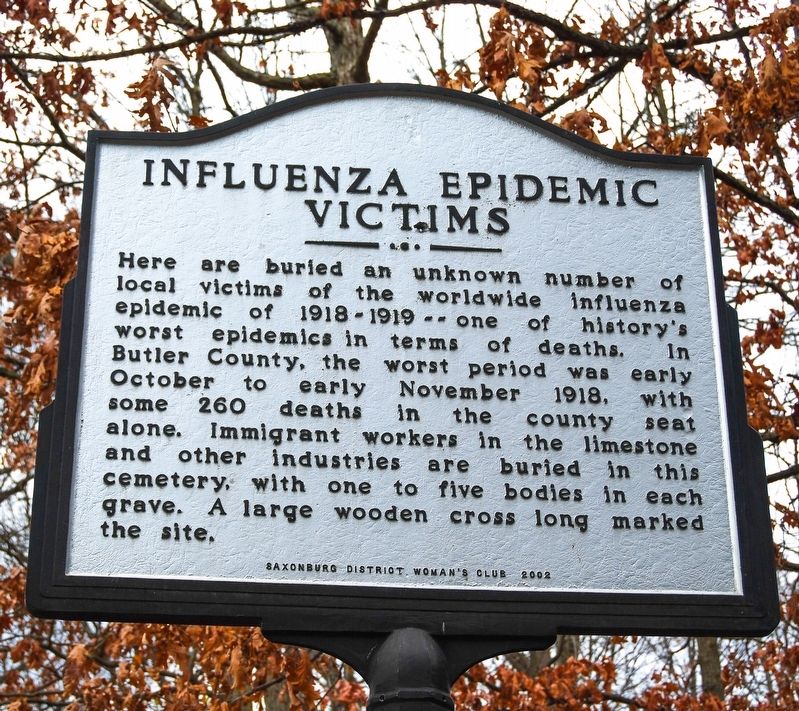 Photographed By Mike Wintermantel, November 12, 2014
1. Influenza Epidemic Victims Marker
Inscription.
Influenza Epidemic Victims. . Here are buried an unknown number of local victims of the worldwide influenza epidemic of 1918-1919, one of history’s worst epidemics in terms of deaths. In Butler County, the worst period was early October to early November 1918, with some 260 deaths in the county seat alone. Immigrant workers in the limestone and other industries are buried in this cemetery, with one to five bodies in each grave. A large wooden cross long marked the site. . This historical marker was erected in 2002 by Saxonburg District Woman's Club. It is Near Cabot in Butler County Pennsylvania

Here are buried an unknown number of local victims of the worldwide influenza epidemic of 1918-1919—one of history’s worst epidemics in terms of deaths. In Butler County, the worst period was early October to early November 1918, with some 260 deaths in the county seat alone. Immigrant workers in the limestone and other industries are buried in this cemetery, with one to five bodies in each grave. A large wooden cross long marked the site.

Topics. This historical marker is listed in these topic lists: Cemeteries & Burial Sites • Science & Medicine. A significant historical year for this entry is 1918.

Location. 40° 48.681′ N, 79° 42.54′ W. Marker is near Cabot, Pennsylvania, in Butler County. Marker is at the intersection of Cornetti Road and Sasse Road, on the right when traveling north on Cornetti Road. Touch for map. Marker is in this post office area: Cabot PA 16023, United States of America. Touch for directions.

Other nearby markers. At least 8 other markers are within 7 miles of this marker, measured as the crow flies. Reverend Richard C. Christy (approx. 2.8 miles away); William A. Smith (approx. 5.1 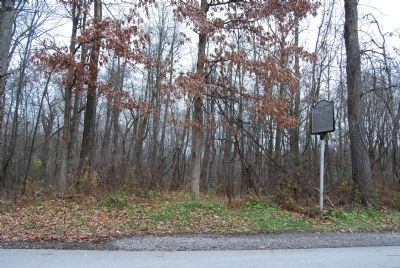 Just north of West Winfield Township in Butler County, is a silent and sobering place known as the Wooden Cross (or Black Cross) Cemetery, although the title of cemetery is a bit of a stretch. In the early 1900s, many Polish and Slovak immigrants moved into the area to work in the expanding industries such as the limestone mine, sand plant, brickyard, salt works, or tile works that were in the area. However, in 1918, many of these workers became exposed to the influenza virus, a disease that was quickly turning into an international epidemic.

The virus proved to be a deadly encounter for many of these people, and many died without a church, organization, or family that would ensure they received a proper burial. Like many immigrant laborers in the early 20th century, most of these 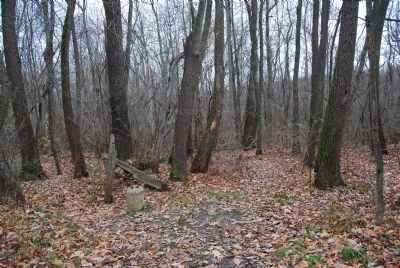 Photographed By Mike Wintermantel, November 12, 2014
3. Influenza Epidemic Victims Marker
Site of former cross mentioned on marker
men were single, having left their families to earn money and get established in the United States. At the time the county, state, and federal governments refused to provide a burial for the massive amount of people who had succumbed to the flu without anyone to take care of post-mortem affairs.

(Submitted on November 12, 2014, by Mike Wintermantel of Pittsburgh, Pennsylvania.)

... Lasting from January 1918 to December 1920, it infected 500 million people—about a quarter of the world's population at the time The death toll is estimated to have been anywhere from 17 million to 50 million, and possibly as high as 100 million, making it one of the deadliest pandemics in human history. ...

There are various theories of why the Spanish flu was “forgotten.” The rapid pace of the pandemic, which, for example, killed most of its victims in the United States within less than nine months, resulted in limited media coverage. The general population was familiar with patterns of pandemic disease in the late 19th and early 20th centuries: typhoid, yellow fever, diphtheria and cholera all occurred near the same time. These outbreaks probably lessened the significance of the influenza pandemic for the public. In some areas, the flu was not reported on, the only mention being that of advertisements for medicines 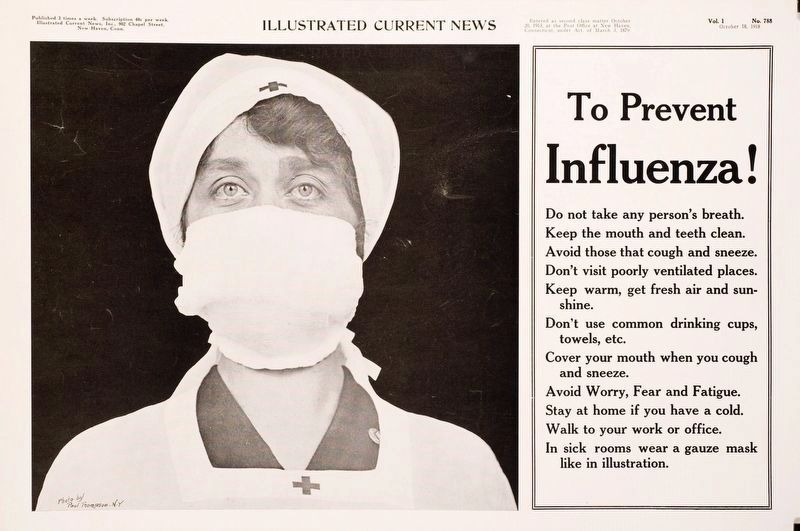 Do not take any person’s breath.
Keep the mouth and teeth clean.
Avoid those that cough and sneeze.
Don’t visit poorly ventilated places.
Keep warm, get fresh air and sunshine.
Don’t use common drinking cups, towels, etc.
Cover your mouth when you cough or sneeze.
Avoid Worry, Fear and Fatigue.
Stay at home if you have a cold.
Walk to your work or office.
In sick rooms wear a gauze mask like in illustration.

claiming to cure it.

On Sep­tem­ber 28, 1918, around 200,000 people crammed the streets of Phi­la­del­phia to watch the two mile Liberty Loan Parade, meant to raise funds for the war effort. Unfortunately, Director of Public Health, Dr. Wilmer Krusen, ignored the advice of medical professionals who urged him to cancel the parade or risk an epidemic. Krusen downplayed the danger of spreading the disease, knowing that the parade would raise millions of dollars in war bonds. Within a week, every bed in Philadelphia’s 31 hospitals was filled with 45,000 citizens afflicted with influenza.