The Congressional Medal of Honor 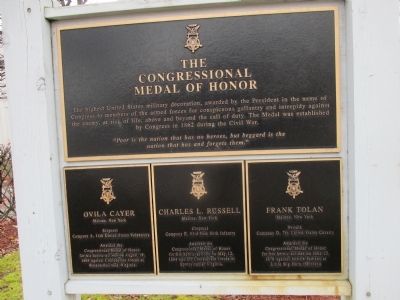 The highest United States military decoration, awarded by the President in the name of Congress to members of the armed forces for conspicuous gallantry and intrepidy against the enemy, at risk of life, above and beyond the call of duty. The medal was established by Congress in 1862 during the Civil War.
"Poor is the nation that has no heroes, but beggard is the nation that has and forgets them."

Topics and series. This memorial is listed in these topic lists: 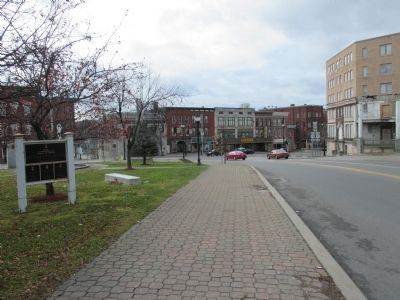 Photographed By Anton Schwarzmueller, November 9, 2014
2. Southward on Elm Street - NY 30
Towards the intersection with US 11 - East Main Street. US 11 is marked north-south but is compass east-west across Franklin County. The Civil War monument is behind the fir tree.

Click or scan to see
this page online
War, US Civil • Wars, US Indian. In addition, it is included in the Medal of Honor Recipients series list.

Location. 44° 50.962′ N, 74° 17.47′ W. Marker is in Malone, New York, in Franklin County. Memorial is at the intersection of Elm Street (New York State Route 30) and East Main Street (U.S. 11), on the right when traveling north on Elm Street. Marker is a few yards behind and north of the Civil War monument that commands the intersection. Touch for map. Marker is in this post office area: Malone NY 12953, United States of America. Touch for directions.