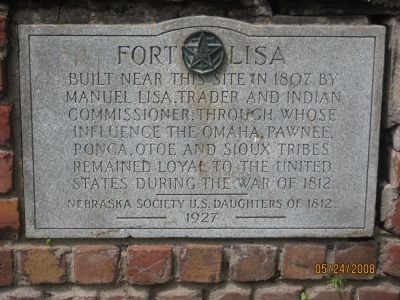 Photographed By Michael James, May 24, 2008
1. Fort Lisa Marker
Inscription.
Fort Lisa. . , Built near this site in 1807 by Manuel Lisa, trader and indian commissioner, through whose influence the Omaha, Pawnee, Ponca, Otoe and Sioux tribes remained loyal to the United States during the War of 18 12. . This historical marker was erected in 1927 by Nebraska Society U.S. Daughters of 18 12. It is Near Omaha in Douglas County Nebraska

Built near this site in 1807 by Manuel Lisa, trader and indian commissioner, through whose influence the Omaha, Pawnee, Ponca, Otoe and Sioux tribes remained loyal to the United States during the War of 1812.

Topics and series. This historical marker is listed in these topic lists: Forts and Castles • Native Americans • Settlements & Settlers • War of 1812. In addition, it is included in the United States Daughters of 1812, National Society series list. A significant historical year for this entry is 1807.

Location. 41° 22.401′ N, 95° 57.217′ W. Marker is near Omaha, Nebraska, in Douglas County. Marker is at the intersection of John J Pershing Dr and Hummel Rd, on the left when traveling north on John J Pershing Dr. Marker is located at the entrance to Hummel Park and co-located with John Pierre Cabanne's. Touch for map. Marker is in this post office area: Omaha NE 68112, United States of America. Touch for directions.

Other nearby markers. At least 8 other markers are within 3 miles of this marker, measured as the crow flies. John Pierrre Cabanne's (here, next to this marker); Lewis and Clark Campsite (approx. 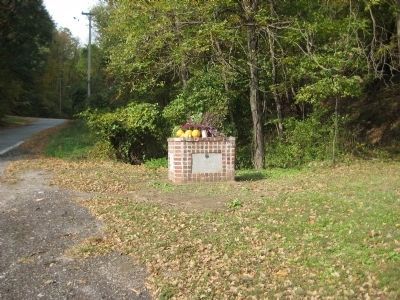 More about this marker. The marker had been in disrepair for many years and was recently rebuilt by the United States Daughters of 1812 in Nebraska in collaboration with the Daughters of the American Revolution who placed the Pierre Cabanne marker on the other side. Both markers were rededicated in a ceremony held October 11, 2008.

Regarding Fort Lisa. There was more than one Fort Lisa; this was the first of two. 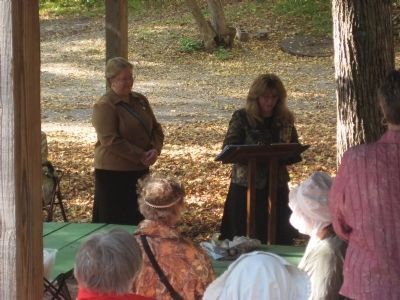 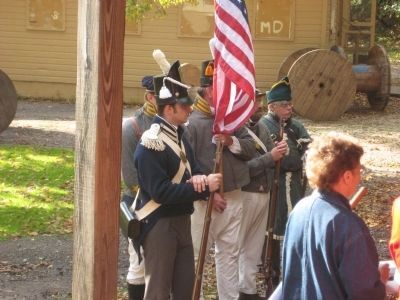