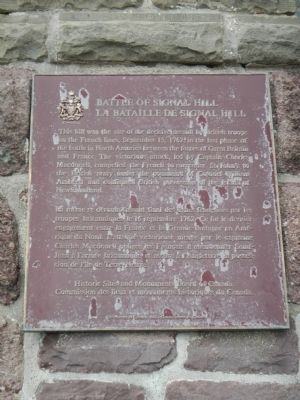 English
This hill was the site of the decisive assault by British troops on the French lines, September 15, 1762, in the last phase of the battle in North America between the forces fo Great Britain and France. The victorious attack, led by Captain Charles Macdonell, compelled the French to surrender St. John’s to the British army under command of Colonel William Amherst and confirmed British possession the Island of Newfoundland.

Topics and series. This historical marker is listed in this topic list: War, French and Indian. 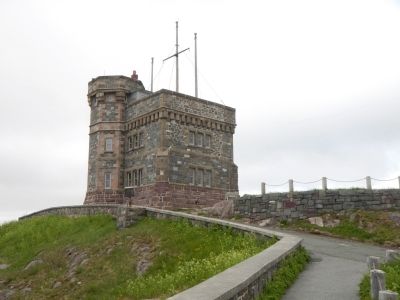 Photographed By Barry Swackhamer, June 22, 2014
2. Battle of Signal Hill Marker
The marker is mounted on the closest corner of Cabot Tower in this view.

Click or scan to see
this page online
In addition, it is included in the Canada, Historic Sites and Monuments Board series list. A significant historical date for this entry is September 15, 1901.

More about this marker. This marker is mounted on Cabot Tower at Signal Hill National Historic Site.

Also see . . .  Battle of Signal Hill. On September 13, 1762, the British landed at Torbay, a few miles to the north. Ternay and Haussonville were unable to counter it, so to hamper the British advance, they dispatched a detachment 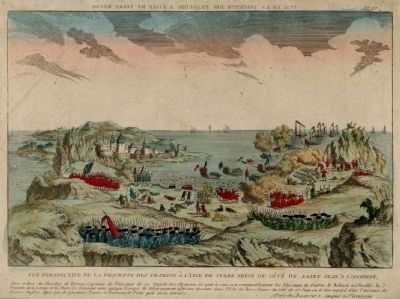