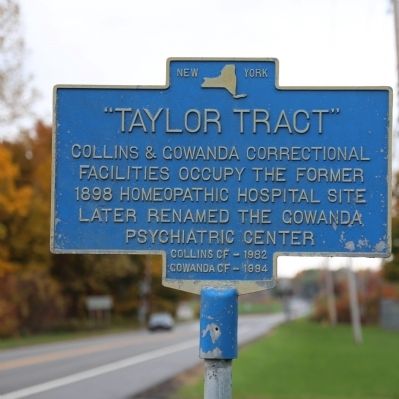 Topics. This historical marker is listed in this topic list: Science & Medicine. A significant historical year for this entry is 1898. 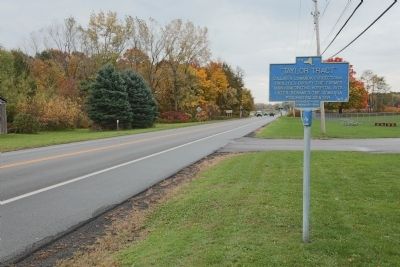 Click or scan to see
this page online
. LSU Digital Commons website entry:
2006 thesis by Ursula Goldsmith. Excerpt: “In 1894 the state of New York took back the title to 200 acres of that tract to construct a state hospital as a refuge for the ‘insane.’ The first building was completed in 1898 at what was known as Gowanda State Homeopathic Hospital. About 100 buildings have been erected since 1898. Early on, the inhabitants built tunnels under the facility so as to be able to move patients easily from building to building during the winter. Progressive Era reformers believed that mental illness was the product of environmental factors and that it was preventable. If not treated it would become progressively worse. These beliefs gave rise to the Mental Hygiene Movement. The concept of mental hospitals in the 1930s meant for patients to be separated from society usually by a court order. Patients would then become part of a new utopian society where they could escape from the larger society and be able to contribute to their care by growing victory vegetable gardens, make wicker furniture, make various folk art, and take care of farm animals, and thus to return to a simpler life of a previous period that was basically totally agrarian.” (Submitted on November 16, 2014.)
Credits. This page was last revised on December 30, 2021. It was originally submitted on November 16, 2014, by J. J. Prats of Powell, Ohio. This page has been viewed 303 times since then and 29 times this year. Photos:   1, 2. submitted on November 16, 2014, by J. J. Prats of Powell, Ohio.

Editor’s want-list for this marker. Photos of the hospital • Can you help?
Share this page.