In Honor of Nellie Bly 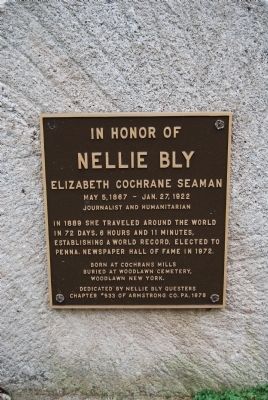 By Mike Wintermantel, November 30, 2014
1. In Honor of Nellie Bly Marker
Inscription.
In Honor of Nellie Bly. Elizabeth Cochrane Seaman. . May 5, 1867 - Jan. 27, 1922 . Journalist and Humanitarian . In 1889 she traveled around the world in 72 days, 6 hours and 11 minutes, establishing a world record. Elected to Penna. Newspaper Hall of Fame in 1972. . . Born at Cochrans Mills . Buried at Woodlawn Cemetery, Woodlawn New York. . This historical marker was erected in 1978 by Nellie Bly Questers Chapter #533 of Armstrong Co. PA. It is Near Ford City in Armstrong County Pennsylvania

Topics. This historical marker is listed in these topic lists: Communications • Exploration • Women.

Other nearby markers. At least 8 other markers are within 8 miles of this marker, measured as the crow flies. In Memory of Lieutenant Michael Schall, Sr. (here, next to this marker); Cochran Mills Bridge (approx. 0.3 miles away); Blanket Hill (approx. 6.8 miles away); a different marker also named Blanket Hill 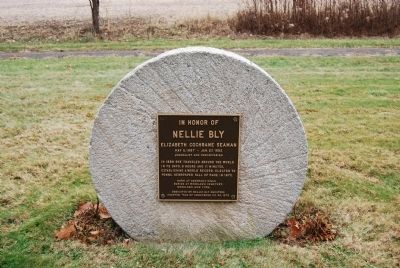 More about this marker. Marker is mounted to a grindstone wheel 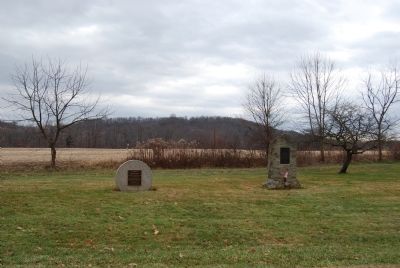