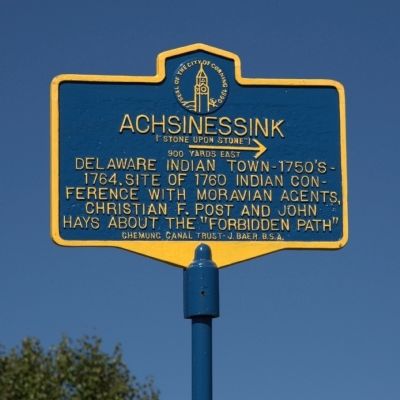 Topics. This historical marker is listed in these topic lists: Colonial Era • Native Americans. A significant historical year for this entry is 1764.

Location. 42° 8.876′ N, 77° 3.2′ W. Marker is in Corning, New York, in Steuben County. Marker is at the intersection of Center Way (New York State Route 414) and Corning Boulevard, on the right when traveling south on Center Way. It is beside the walkway between the old Centerway Bridge and the Corning Museum of Glass in front of the YMCA. Touch for map. Marker is at or near this postal address: 127 Center Way, Corning NY 14830, United States of America. Touch for directions.

Other nearby markers. At least 8 other markers are within walking distance of this marker. Centerway Bridge (approx. 0.2 miles away); At This Location an Alliance of Prosperity was Formed (approx. ¼ mile away); “Little Joe” Thermometer Draw Tower (approx. 0.3 miles away); Market Street Historic District 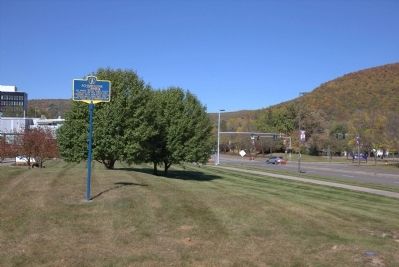 Regarding Achsinessink. The path west from the village was known as “the forbidden trail” because Europeans were prohibited from using it. Achsinessink village was destroyed by British and Iroquois forces in 1764. The natural stone formations resembling stacked stones were destroyed first by railroad construction in the late 19th century and finished off by highway building in the late 20th century.

Editor’s want-list for this marker. Photos of the Achsinessink Monument • Can you help?
Share this page.