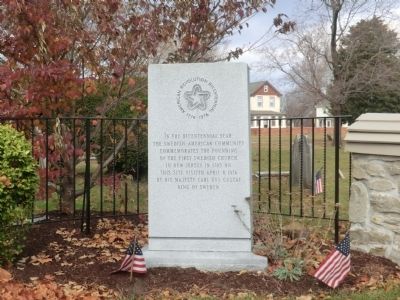 In the Bicentennial Year the Swedish-American Community commemorates the founding of the First Swedish Church in New Jersey in 1703 on this site, visited April 8, 1976 by his Majesty Carl XVI Gustaf, King of Sweden.

Topics and series. This memorial is listed in these topic lists: Churches & Religion • Colonial Era • War, US Revolutionary. In addition, it is included in the The Spirit of ’76, America’s Bicentennial Celebration series list.