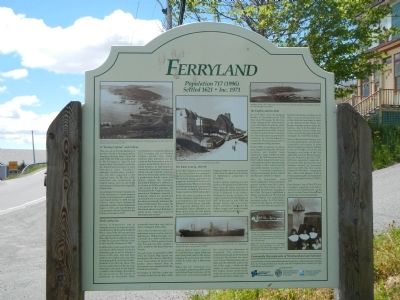 A “Fishing Capital” and Colony
This was one of the first harbours in the New World to be frequented by European fishing ships. From the early 1500s The Pool was well known to the Portuguese, Spanish and French fleets. Ferryland is probably the English pronunciation of early (an) early Portuguese name, “Farilham,” although a French name, “Forillon,” has also been suggested as the original form. By the late 1500s Ferryland was exclusively an English station, and was one of the most popular harbours for migratory fishing ships.

Accordingly, Ferryland was also one of the first places in North America where it was proposed to establish a year-round colony. In 1620 George Calvert (later Lord Baltimore) acquired a grant fo land. Settlement began in 1621, and Lord Baltimore was granted a Royal Charter for the Colony of Avalon in 1623.

Lord Baltimore visited the colony in 1627, bringing out two Roman Catholic priests. One, Father Anthony Pole, remained over the winter as the first resident priest to minister in the British Territories of North America. In 1628 Baltimore returned 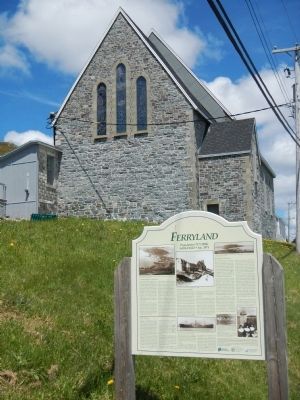 Click or scan to see
this page online
to Ferryland, bringing his family and 40 Catholic colonists. However, the hostility of the French, a particularly harsh winter and illness among the colonists diminished Baltimore’s enthusiasm for Avalon. In 1629 he and his family, with several of the colonists, left Ferryland for the Virginia colony, at Jamestown. Baltimore returned to England, where he petitioned successfully for a second charter - the colony (eventually to become the State) of Maryland. Even today the inscription of the Great Seal of Maryland attests Lord Baltimore’s claim to be “Absolute Lord of Maryland and Avalon.”

The Kirke Family, 1638-96
In 1637 the Company of Adventurers to Newfoundland was granted a charter to Newfoundland, with Sir David Kirke being appointed the first Governor of the proposed colony. The next year Kirke and 100 colonists took possession of Ferryland, including Baltimore’s house, to serve as their headquarters.

Kirke was soon in trouble on two fronts. Firstly, his claim to Ferryland was disputed by the second Lord Baltimore, Cecil Calvert. Secondly, the migratory fishing fleet were incensed by Kirke’s attempt to tax them and to claim the best fishing rooms. Kirke was recalled to England where he was imprisoned (and where he died) for his seizure of Baltimore’s properties in Ferryland.

Kirke’s family continued in the fishery 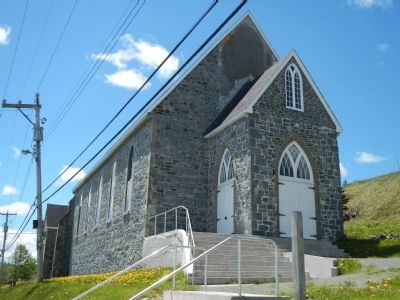 Photographed By Barry Swackhamer, June 23, 2014
3. Holy Trinity Catholic Church
at Ferryland until 1696 when they were all taken prisoner to Placentia by the French. After David Kirke II followed in his father’s footsteps by dying a prisoner, his widow married one James Benger, in 1697. In the early to mid-1700s the Benger family with sons-in-law Nason and Dobel, dominated the fishery supply and import-export trade out of Ferryland harbour.

The English and the Irish
By 1715 there were 30 resident families at Ferryland and by 1762 there were 300 people. By this time all the “fishing rooms” in the harbour were in the hands of residents, rather than West Country fishing firms. In many cases this meant that a branch of a West Country family or manager of a firm had taken up permanent residence in Newfoundland to oversee the “Newfoundland end” of the transatlantic fishing business.

In the 1700s a majority of settlers were English Protestants. But both residents and English firms employed a large number of Irish servants. By 1800 Ferryland had an Irish Catholic majority. In later years - through conversion, intermarriage and many of the old Ferryland mercantile families moving to St. John’s - Ferryland continued to become increasingly Irish in culture and Roman Catholic in religion.

One of Ferryland’s (and Newfoundland’s) most prominent pioneer families were the Carters, Robert and Ann Carter 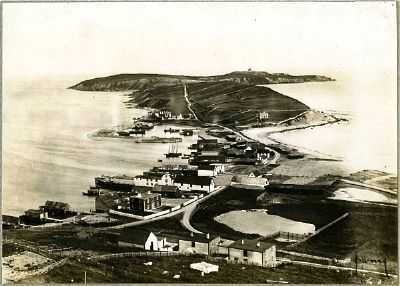 Photographed By Holloway Studio (St. John's, N.L.)
4. Ferryland, taken before 1933
Photo courtesy of Newfoundland and Labrador Provincial Archives. This photo is quite similar to the upper-left-most photo on the marker itself.
came to Ferryland from Devon, England in the 1740s. The family established a fishery and business at The Pool and in 1749 Robert was appointed a surrogate judge. In 1762 Robert Carter led the citizens of Ferryland in a successful defense against the French, from the Isle aux Bois just off shore. Local recounting of the story is that while the men went to assist in the defense of Bay Bulls, two French warships tried to enter the harbour, only to be thwarted once more when the women, led by Ann Carter, manned the guns and badly damaged one of the French ships.

Many of the Ferryland Carters, over several generations, served their community and country in some official or judiciary capacity. William Carter (1751-1840), son of the old Surrogate, was Judge of the Vice Admiralty Court for fifty-two years. His son, Robert Carter R.N. (1791-1872) was appointed magistrate at Ferryland and became the first Member elected for Ferryland district in 1832. His first cousin, Robert III (1790-1852) - a magistrate also - left a vivid glimpse of life in Ferryland during the mid-nineteenth century through his diary of 1832 to 1852.

Peter Weston Carter (1786-1871) was a longtime magistrate at St. John’s, while his sone served as both Prime Minister and Chief Justice of Newfoundland.

Perils of the Sea
Stories of shipwrecks, and of dramatic rescues, are 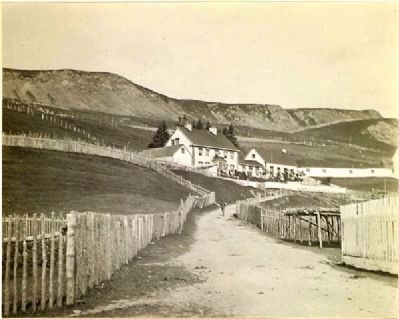 Photographed By Edith S. Watson, 1913
5. The Convent. Ferrylands [sic]
The caption of the convent photo on the marker reads: The original convent and school, built in 1838, and replaced in 1913. For almost 130 years the Presentation Sisters' contribution to schooling and community life in Ferryland was unsurpassed.

Photo (LAC e010791362) courtesy Library and Archives Canada.
important parts of folk history all along the Southern Shore. Some of the oft-repeated tales in Ferryland include wrecks such as that of the Heather in 1856, the Octavia in 1833, the Segreud in 1904, the Evelyn in 1913 and the Torhamvan in 1926.

In 1856 a Mrs. Carter spied four men on icepans off Ferryland. Ten brave fishermen put to sea to attempt a rescue of men, who had been adrift for two nights and a day after abandoning their vessel, the Heather, jammed in ice off Cape Spear. The rescuers landed three of the men, but when they came back for the fourth, a sudden change drove them all out to sea, to the horror of onlookers at Ferryland. They eventually beat their way back to shore, landing at Witless Bay.

One of the best-known tales of an individual rescue involves assistant lightkeeper Philip Keough, who saved the crew of the vessel Octavia in August of 1883 at great personal risk. Keough was later warded a silver medal by the Royal Humane Society.

No such rescue was possible in 1904 when the Danish ship Segreud was lost behind The Downs with all her crew. Local efforts to recover the bodies (later buried here in Ferryland) were commended by the Danish government.

In January of 1913 the Evelyn was wrecked on the Isle aux Bois, while seeking shelter from a storm in Ferryland harbour. Again, fishermen from Ferryland came to the rescue, bringing the seven-man crew of the Evelyn to safety after a harrowing rescue.

When the S.S. Torhamvan was grounded in a dense fog off the beach at Cold East Point in October of 1926 all her crew were safely brought off the vessel by the fishermen of Ferryland. The Torhamvan is remembered locally as the treasured landmark she became for many years before disintegrating due to time and the elements, and for the fate of her cargo - which was the subject of many humorous stories. Her boilers remain on the beach, while the statues in the churchyard grotto are the most visible relic.

Erected by Community Historyboards of Newfoundland and Labrador.

Topics. This historical marker is listed in these topic lists: Settlements & Settlers • Waterways & Vessels. A significant historical month for this entry is January 1913.

Other nearby markers. At least 2 other markers are within walking distance of this marker. Colony of Avalon (about 120 meters away, measured in a direct line); The French Attack Ferryland (approx. 0.6 kilometers away).