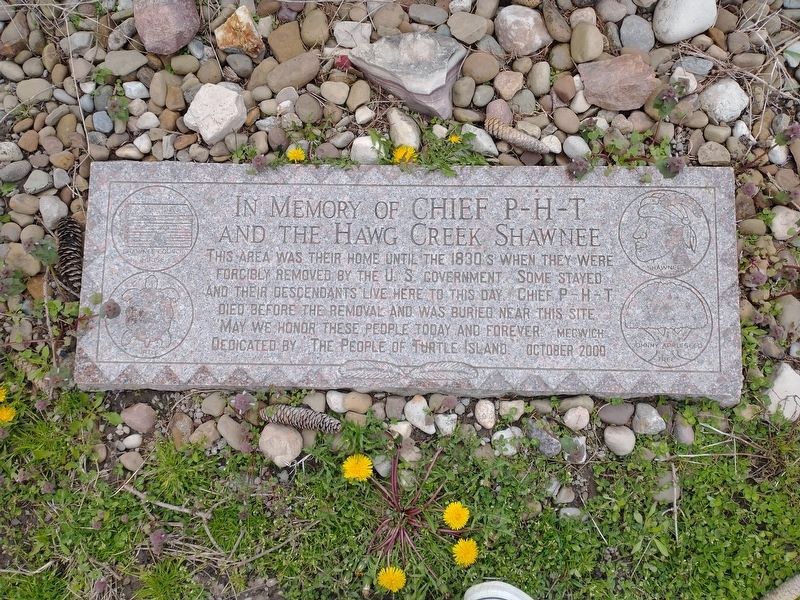 In memory of PHT and the Hawg Creek Shawnee. This area was their home until the 1830's when they were forcibly removed by the U.S. government. Some stayed and their descendants live here to this day. Chief PHT died before the removal and was buried near this site. May we honor these people today and forever. Dedicated by the "People of Turtle Island" October 2000

Topics. This historical marker is listed in this topic list: Native Americans. A significant historical year for this entry is 2000.

Location. 40° 42.093′ N, 84° 9.091′ W. Marker is near Lima, Ohio, in Allen County. Marker is on Shawnee Road, on the left when traveling north. This is located on the grounds of the Shawnee Township Cemetery, just inside the east entrance, to the right/north. Touch for map. Marker is in this post office area: Lima OH 45806, United States of America. Touch for directions.

Other nearby markers. At least 8 other markers are within 2 miles of this marker, measured as the crow flies. Shawnee Council House (within shouting distance of this marker); Johnny Appleseed Tree (approx. 0.9 miles away); Sharp School Bell (approx. 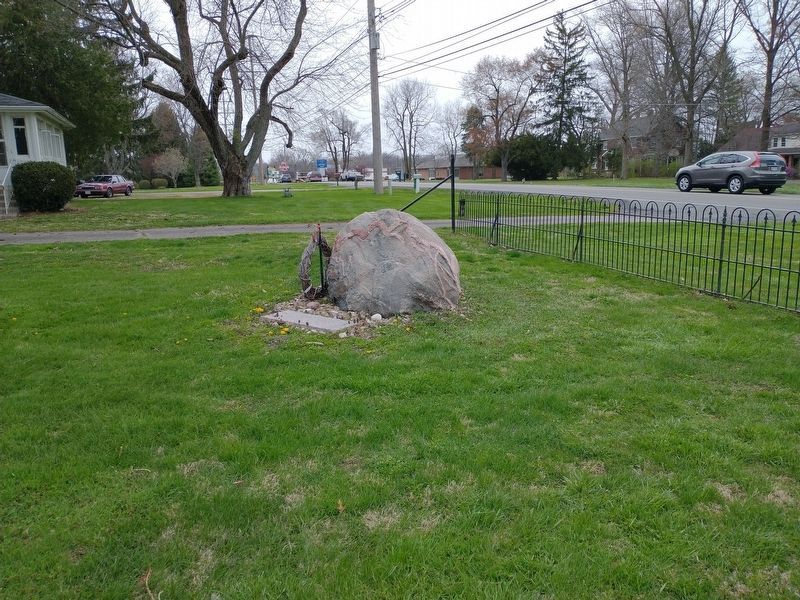 Photographed By TeamOHE, April 20, 2022
2. In Memory of Chief P-H-T and the Hawg Creek Shawnee Marker

Regarding In Memory of Chief P-H-T and the Hawg Creek Shawnee. "It is said that of all the Shawnees in Allen County, Pht, (Pe-Ditch-Ta) was the most widely known and honored, that he was a natural leader among the tribes in Western Ohio. Pht was a leader in tribal difficulties and the world has always welcomed men with initiative. It was through Pht's influence that the Shawnee Council House was built. After a long illness, he was buried in the garden near his cabin, the grave being dug by his wife and daughter. The settlers looked upon the Shawnee Chief with admiration - they regarded him as a man who would have distinguished himself in community and in any nationality." Bob Holdgreve

From the Lima News - July 11, 1999: A five-ton granite rock is what the local Native Americans have chosen to honor the Shawnee Indian Chief Pht. After months of waiting and anticipating, the stone is sitting at Shawnee Cemetery, just across the street from the chief's 168-year-old grave.
"The rock is near the chief's grave, without being on private property," says Helen Spyker, a member of the Native American interest group, People of the Middleground. That group selected the stone, which they believe has special significance.
"We were drawn to that rock because of the symbols on it. It's a powerful rock, fitting for a chief," said member Brenda Hawk.
The granite rock has a rose quartz serpentine symbol across the top, and a turtle symbol facing the northeast. "Grandmother earth is the turtle, and that's a sacred symbol," explained Hawk. And for some, the rock contains even more symbols. "Some have seen faces in the rock; others have seen a medicine wheel," recalls Hawk.