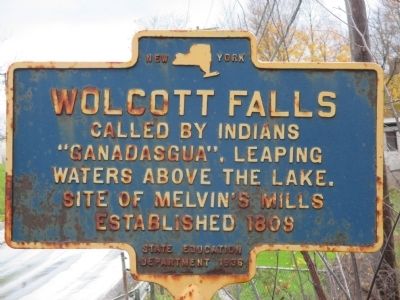 Topics. This historical marker is listed in these topic lists: Native Americans • Settlements & Settlers • Waterways & Vessels. A significant historical year for this entry is 1809.

Location. 43° 13.287′ N, 76° 48.685′ W. Marker is in Wolcott, New York, in Wayne County. Marker is on Mill Street, 0.1 miles west of Cemetery Road, on the left when traveling east. Marker is at the east end, north side, of the short bridge over Wolcott Creek. Touch for map. Marker is in this post office area: Wolcott NY 14590, United States of America. Touch for directions. 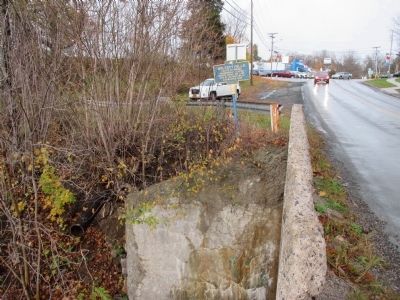 Regarding Wolcott Falls. Text on Kiosk:
Cayuga Indians. Long before Wolcott was settled it was a wilderness of trees and swamps. Deer and bear were plentiful in the area along with fish, berries, herbs, and willow for baskets.
The Indians set up summer camps to dry the fish, meats, fruits and make baskets. Come fall they took all they had gathered and went back to their winter grounds in and around the Finger Lakes. Many arrowheads have been found in this area.

Harden's Mill. As history tells us circa 1807, Jonathan Melvin journeyed to the area known today as Wolcott. He came to inspect the falls. He liked and purchases through 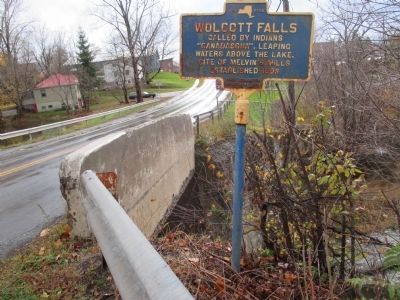 Photographed By Anton Schwarzmueller, November 7, 2014
3. Westward on Mill Street
the Pultney Estate, Williamson's Patent, lot #50, 500 wilderness acres, at a reduced rate, on the condition that he build a sawmill and a gristmill. The sawmill was placed on the north side of the falls and the grist mill on the south side. The area became known as Melvin's Mill. Mr. Melvin had three log cabins built for his workers. One was where the present NAPA stands, one where the entrance to the north parking lot behind the stores is today, and the third stood on the hill east of the mills. Melvin built his own cabin approximately where Lake Avenue and Wright Street meet. These mills became gathering places for the people who started coming to the area.
The Mill changed hands a few times over the years. In 1945 George Harnden turned the mill over to his son, Alvis. It was shut down in 1960 for financial reasons.
Not only did the mill make flour, but also chicken and cattle feed.
In 1969 children set the mill on fire. There is a bit of the foundation and part of the flume still visible.
We were unable to find any information or pictures of the sawmill.
For more information, please [go to the museum].

Text of plaque on kiosk:
The History of Wolcott Falls and the Village of Wolcott
The village of Wolcott was first settled in 1806 by Jonathan Melvin Sr., who moved here from the township of Phelps, Ontario County, New York. He bought 500 acres 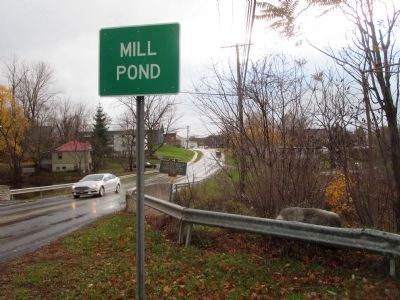 Photographed By Anton Schwarzmueller, November 7, 2014
4. Mill Pond Sign and Marker
Wolcott Creek on the north side of the bridge (right) spills from the mill pond on the south side of the bridge (left).
of land that primarily encompassed the area of the present village. The best reason for purchasing the land in this particular area was the falls that would be necessary for the mills. This in turn would bring more business and new settlers to the area.

In 1809 Mr. Melvin built the first sawmill and gristmill, located by the falls. Later in 1812, Melvin sold the mills to Mr. Obadiah Adams, a land surveyor who came to the area in 1810. According to Wolcott New York, Old and New, the sale price for both mills was $10,000. The first town meeting was held at Melvin's Mill on April 3, 1810. Obadiah Adams and two other gentlemen were chosen as assessors. Osgood Church was selected as the first town supervisor.

Melvin built a log house at the present intersection of Wright Street and Lake Avenue. In 1813 he built a two-story house at the opposite end of Wright Street on the corner of West Main Street. Melvin painted his house black and henceforth it was known as the "Black House". It was moved to Smith Street in 1878 where it remains today, however it is no longer black. Mr. Melvin was a generous man who donated land on the Southwest corner of Main Street and New Hartford Street for a school or a church of any denomination. The Baptist Church sits on that site today.

Adams built the first tavern in Wolcott on the site of the present Wolcott Hotel. He later bought 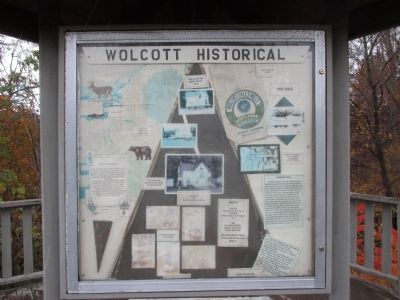 Photographed By Anton Schwarzmueller, November 7, 2014
5. Wolcott Falls Kiosk
This kiosk is at a falls viewing platform at the opposite side of the waterway from the marker.
and moved a small building, attaching it to the tavern. This was used as the first store for Wolcott. Adams was the first merchant and landlord in the village. He also erected a kiln for drying corn. Adams became involved in more ventures requiring considerable amounts of money. In today's terminology, we might say that he 'overextended' himself, eventually losing everything and died in Rochester, a poor man.

Another entrepreneur in the early history of the village of Wolcott was Osgood Church, Mr Adams' brother-in-law. He was the first town supervisor. he arrived in town in the spring of 1808 and bought a parcel of land west of the village of Wolcott, where Duane Cahoon and his family reside. He was active in helping settle the area and thus helped the prosperity of Wolcott. He died in 1815 from consumption and was buried where the Episcopal Church is located. His remains were moved to the family cemetery of Obadiah Adams when the church was erected. However, the Adams' family plot was to the south of the tavern, which is now the village parking lot. Again his remains were moved and his grave is now located in the cemetery on Lake Avenue.

There are many stories about the men who came to this area, but room does not allow for them here. Most of the settlers who came to the area were from Connecticut and Massachusetts. Our village gets its name from Oliver Wolcott, 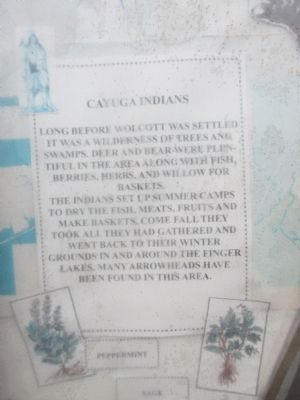 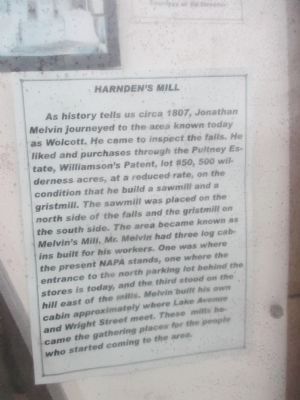 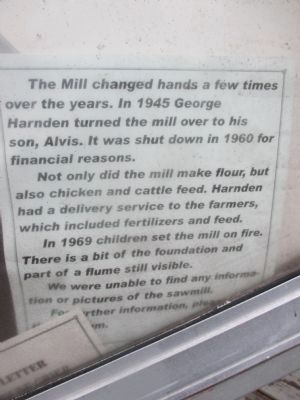 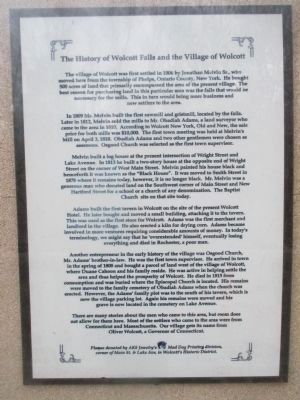 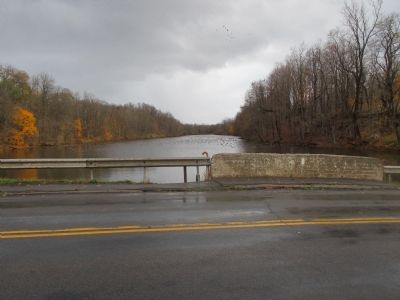 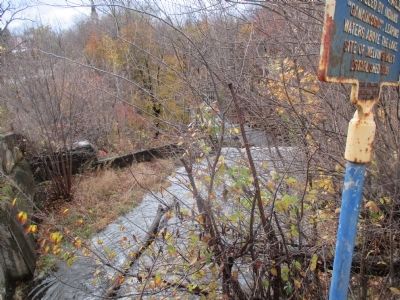 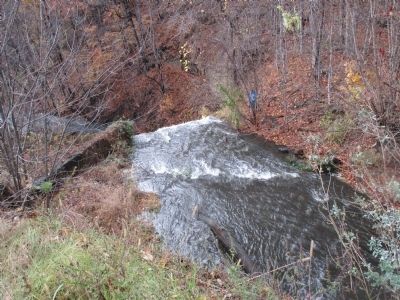 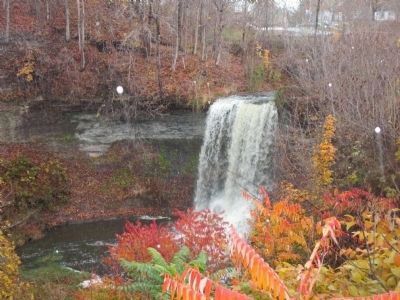