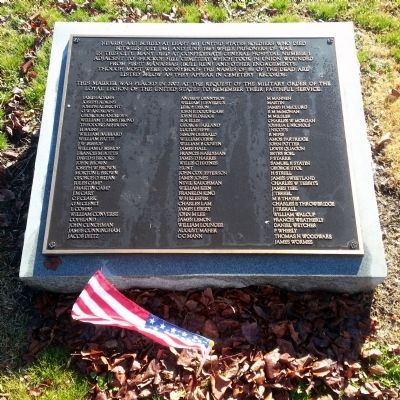 Nearby are buried at least 661 United States soldiers who died between July 1861 and June 1863 while prisoners of war in this city. Many died at Confederate General Hospital Number 1 adjacent to Shockoe Hill Cemetery which took in Union wounded from First Manassas (Bull Run) and other engagements. Though most were anonymous, the names of 88 of the dead are listed below as they appear in cemetery records.

This marker was placed in 2002 at the request of the Military Order of the Loyal Legion of the United States to remember their faithful service. 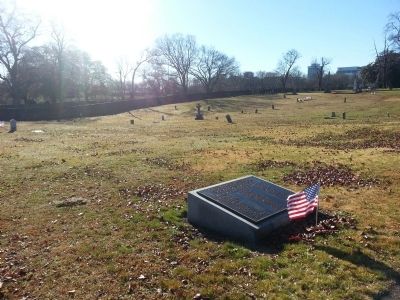 Erected 2002 by Military Order of the Loyal Legion of the United States.

Topics. This memorial is listed in this topic list: War, US Civil. A significant historical month for this entry is June 1863.

Location. 37° 33.118′ N, 77° 25.867′ W. Marker is in Richmond, Virginia. Memorial can be reached from the intersection of Hospital Street and North 4th Street, on the left when traveling west. Touch for map. Marker is in this post office area: Richmond VA 23219, United States of America. Touch for directions.