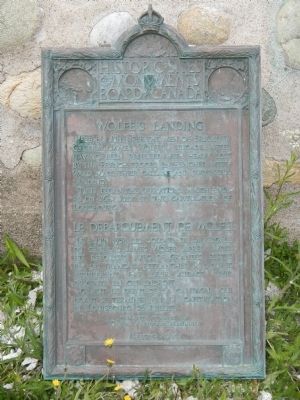 English:
Here, 8th June, 1758, the men of Brigadier General James Wolfe’s brigade, after having been repulsed with heavy loss by the French troops entrenched westward made their gallant and successful landing.

Thus began the operation which ended on 26th July by the capitulation of Louisbourg.

Topics and series. This historical marker is listed in this topic list: War, French and Indian. In addition, it is included in the Acadian History, and the Canada, Historic Sites and Monuments Board series lists. A significant historical date for this entry is June 8, 1758. 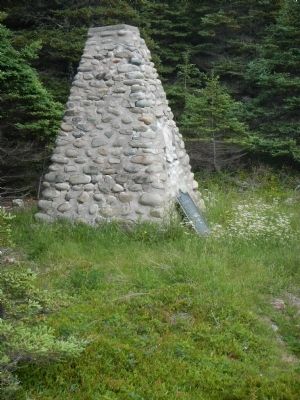 Click or scan to see
this page online
45° 52.725′ N, 60° 3.27′ W. Marker is in Louisbourg, Nova Scotia, in Cape Breton Region. Marker can be reached from Kennington Cove Road. Touch for map. Marker is in this post office area: Louisbourg NS B1C 2L2, Canada. Touch for directions.

More about this marker. Kennington Cove is locate about 5 km south west of Fortress Louisbourg on Kennington Cove Road. The marker can be located by taking a poorly marked trail to the left of the parking lot, across a small bridge and around the point.

Also see . . .  Siege of Louisbourg (1758) - Wikpedia. French defenses were initially successful and after heavy losses, Wolfe ordered a retreat. However, at the last minute, a boatload of light infantry in Wolfe's division (i.e., members of Rogers Rangers) found a rocky inlet protected from French fire and secured a beach head. Wolfe redirected the rest of his division to follow. (Submitted on December 28, 2014, by Barry Swackhamer of Brentwood, California.) 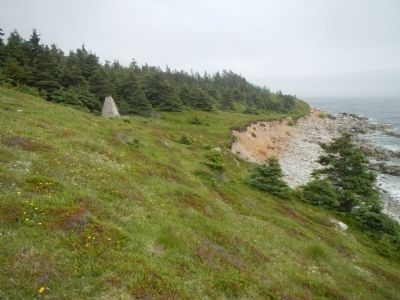 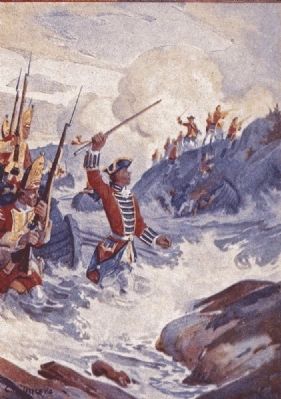