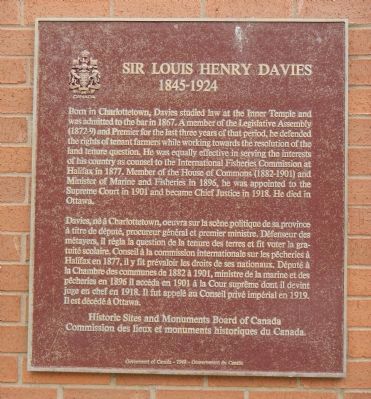 Born in Charlottetown, Davies studied law at the Inner Temple and was admitted to the bar in 1867. A member of the Legislative Assembly (1872-9) and Premier for the last three years of that period, he defended the rights of tenant farmers while working towards the resolution of the land tenure question. He was equally effective in serving the interests of his country as counsel to the International Fisheries Commission at Halifax in 1877. Member of the House of Commons (1882-1901) and Minister of Marine and Fisheries in 1896, he was appointed to the Supreme Court in 1901 and became Chief Justice in 1918. He died in Ottawa. 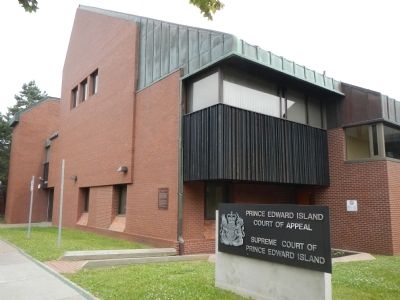 Topics and series. This historical marker is listed in these topic lists: Animals • Industry & Commerce • Waterways & Vessels. In addition, it is included in the Canada, Historic Sites and Monuments Board series list.

More about this marker. This marker is on the Prince Edward Island Court of Appeal building.