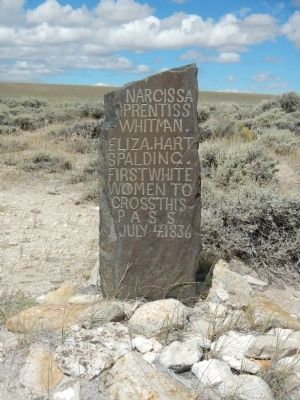 Topics and series. This historical marker is listed in these topic lists: Roads & Vehicles • Settlements & Settlers • Women. In addition, it is included in the Oregon Trail series list. A significant historical date for this entry is July 4, 1836.

Location. 42° 20.587′ N, 108° 53.219′ W. Marker is near Lander, Wyoming, in Fremont County. Marker is on Emigrant Trail near Oregon Bluffs Road, on the right when traveling west. Touch for map. Marker is in this post office area: Lander WY 82520, United States of America. Touch for directions. 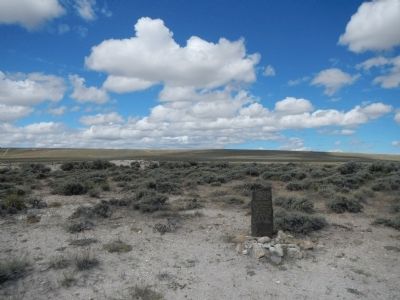 More about this marker. This marker is located at the South Pass summit on the Oregon/California/Mormon/Pony Express Trail.

"Captain H.G. Nickesron, president of the Wyoming Oregon Trail Commission, chiseled this sign and many others like it between 1913 and 1921. He wrote in a letter, "It took me two days to cut 80 letters in the Whitman-Spalding stone." - Mike Jording, A Few Interested Residents, Wyoming Historical Markers & Monuments.

Also see . . .
1. Narcissa Whitman - Encyclopedia of World Biography. In 1836, American missionary Narcissa Whitman (1808–1847) became the first woman of European heritage to cross the Rocky Mountains into the western United States. She and her husband were on an arduous journey westward, hoping to bring Christianity to Native American tribes in the Columbia Plateau region in what is present-day Washington state. They built one of the first permanent settlements in the area, but 11 years later their mission was attacked after long-simmering tensions with the Cayuse erupted into violence, and both were killed. (Submitted on January 27, 2015, by Barry Swackhamer of Brentwood, California.)