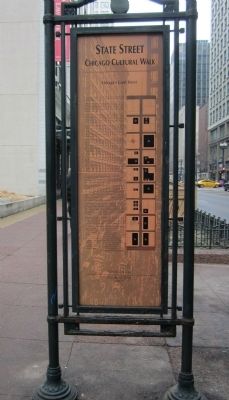 There is only one State Street. Widely celebrated in song, “That Great Street” has been known since the 1870s for its concentration of premier department stores and world-class architecture.

Chicago's earliest shopping district was located along Lake Street. Parallel to the Chicago River and only one block south, Lake Street absorbed the traffic in commerce that already existed along the river’s edge. State Street developed when entrepreneur Potter Palmer recognized that the curve of the river would limit Chicago's potential economic growth and envisioned State is the city’s major retailing thoroughfare.

State Street in the 1860s was a narrow, unpaved street edged by wooden sidewalks and a confusion of small shops. Palmer, who had been in business with Marshall Field and Levi Leiter in a Lake Street store before the Civil War, translated his dream into reality by purchasing a ¾ mile stretch of land along State Street, convincing Field and Leiter to open the street’s first major department store at the northeast corner of State and Washington 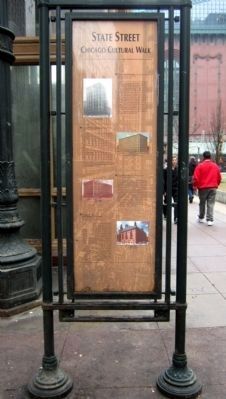 Click or scan to see
this page online
Streets.

By 1870, State Street had become Chicago’s shopping destination. Widespread destruction caused by the Chicago Fire of 1871 merely delayed its growth. Find the 1890s, State Street was home to Chicago's finest retail establishments, with the more prestigious and expensive stores clustered at the north end and the more popular stores carrying a greater variety of merchandise at the south end. When the city's first subway system was completed under State Street in 1943, it provided for direct pedestrian connections from the mezzanine level stations to the basements of many of the department stores.

Department store architecture is as important to Chicago as State Street’s retailing history. It reflects the genius of the city's earliest great designers. Lining State Street are buildings by William Le Baron Jenny and the architects who trained under him: Louis Sullivan, William Holabird, Martin Roche, and Daniel Burnham. Taking advantage of Chicago's location as a railroad hub, its rapid commercial expansion in the lumber, coal, and steel industries, its population explosion (Chicago tripled in size between 1870 in 1890), and its immediate need to rebuild following the Chicago Fire, these men set out to create a new building type with a whole new look. Because Chicago’s central business district was restricted in size by Lake Michigan, the Chicago River 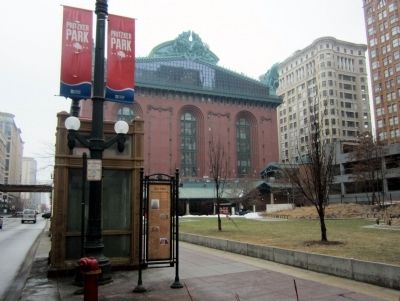 By Bernard Fisher, March 10, 2015
3. State Street Marker
and, to the south, railroad yards, the only direction to build was up. The result was the skyscraper.

The commercial style developed by these pioneers in Chicago's Loop between 1880 and 1910 became known as the “Chicago School of Architecture.” Recognized world-wide for its modernism, the style of these Chicago School skyscrapers had no precedent. Their exterior design looks like a grid, an expression of the building’s interior metal frame, and ornamentation was generally simple and nonhistorical. The style is an outgrowth of major advances in technology. Steel frame construction, developed in the 1880s, meant that tall buildings with flexible floor plans could be erected quickly and cheaply. The first sheets of plate glass rolled in the 1880s allowed for maximum light and ventilation. Faster and safer elevators in the 1870s made tall buildings practical, and new fireproofing techniques made them safe.

In 1893, Jenney firmly established his reputation as a pioneer in the development of steel skeleton construction, designing huge buildings to house Siegel, Cooper & Co. (known as the Second Leiter Building) and the Fair Store (demolished). Distinguished by broad open floor space, impressive height, and simplified exteriors, both ushered in the era of the “Big Store.”

Carson, Pirie Scott & Co., before moving to its current location, 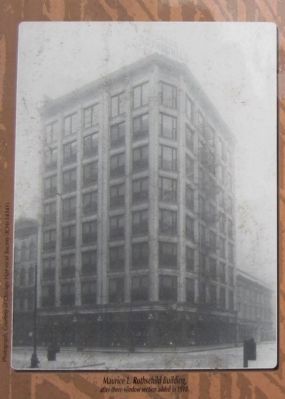 March 10, 2015
4. Maurice L. Rothschild Building
operated on the ground floor of the Reliance Building. This tall narrow building sheathed in white terra cotta, was designed by Burnham and Root. It is universally recognized as one of Chicago’s most distinguished early steel and glass skyscrapers. In 1899, Louis Sullivan began designing the Schlesinger and Mayer Store building, which has housed Carson’s since 1904. There is no finer example of a simple, elegant Chicago School building. Like numerous other buildings of the Chicago School located along State Street, such as the Mandel Brothers Building and the A.M. Rothschild & Co. Building, Carson's interior metal frame is expressed in a gridlike exterior design. In addition, Sullivan’s highly original ornamentation embellishes the frame. 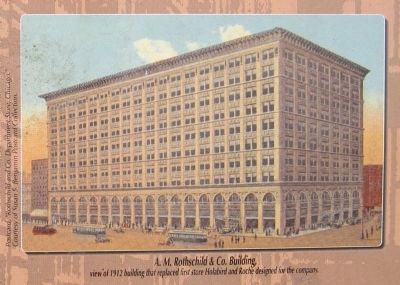 Maurice L. Rothschild, before he hired Holabird & Roche to build this State Street store, operated a successful retail clothing operation in Minneapolis and in St. Paul. Taking advantage of the growth potential for department stores on State Street, he erected an eight-story building in 1906, added a section three windows wide along State in 1910, and four more floors in 1928 designed by Alfred S. Alschuler. The buildings underlying steel skeleton made this expansion possible. It also allowed for large windows to maximize interior light and ventilation. The construction techniques and design simplicity of the Maurice L. Rothschild Building made it a fine example of the Chicago School of Architecture. The store kept its State Street operation until 1971. In 1979 the building was acquired by The John Marshall Law School. The first floor houses retail shops; the other 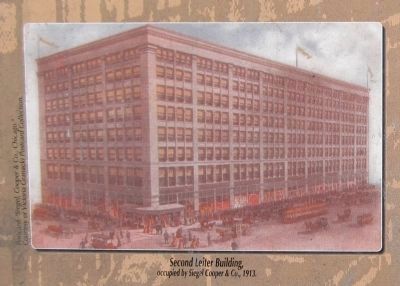 The initial “R” found in medallions centered between each arch reminds us that A.M. Rothschild founded a company that once occupied this 10-story, block-long building (There is no relationship between A.M. Rothschild and Maurice L. Rothschild). Organized as a department store from the beginning, Rothschild & Co. differed from all other State Street retail establishments, which started as dry goods and clothing stores and added other merchandise as shoppers demanded. In 1911, as business grew, Rothschild demolished the several small buildings the store occupied (including a seven-story section designed by Holabird & Roche) and hired Holabird & Roche to design this beautiful steel-frame Chicago School building covered in gleaming terrs cotta. From 1936 until the 1980s it served as Goldblatt’s flagship department store. In 1993, the building was purchased by DePaul University and converted into retail, City of Chicago offices, and an expansion of the Loop Campus of DePaul University. 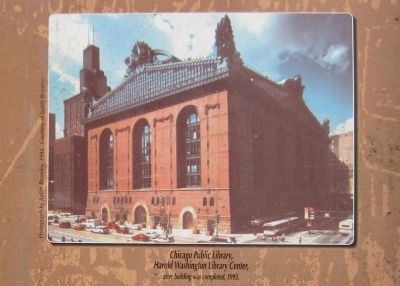 March 10, 2015
7. Chicago Public Library, Harold Washington Library Center
skyscraper. It introduced a new age of architectural design, with a simple gridlike exterior reflecting the building’s interior metal frame construction. Its architect, William Le Baron Jenney, trained many of the city’s eminent designers of Chicago School commercial buildings, including Louis Sullivan, William Holabird, Martin Roche, and Daniel Burnham. Occupying a half city block, this eight-story building was developed by Levi Leiter and first leased to the “Big Store,” Siegel, Cooper & Co. Neither ornate nor exclusive, it offered a wide range of goods at low prices. Jenney’s skeletal design, with unobstructed interior floor area, was easily adaptable for store use by Sears, Roebuck and Co. from 1932 until 1986 and for office use today.

The Chicago Public Library's central library is located in the Harold Washington Library Center. On the exterior, this grand civic building as a bold presence. Like many of the other buildings which define State Street's character, the Library occupies an entire city block. Inspired by neoclassicism, its design draws heavily on Chicago's rich 19th and 20th century architectural heritage. It stands 10 stories, with a rough-faced stone base resembling that of Burnham and Root's Rookery and five-story arched windows reminiscent of Louis Sullivan's Auditorium Building. The steel and glass curtain wall at the rear of the building recalls the many modern Chicago buildings design by Mies van der Rohe. As its roof, the building is adorned with sculptures of owls symbolizing wisdom, and seed pods and foilage representing the natural beauty of the Illinois prairie. Inside, the public can enjoy an extensive collection of over nine million items. The Library has several performance and meeting areas, including a 385-seat auditorium and a ninth-floor winter garden where free programs, author talks, concert, theater, dance and children's activities are presented.

Topics. This historical marker is listed in these topic lists: Architecture • Industry & Commerce • Roads & Vehicles. A significant historical year for this entry is 1870.