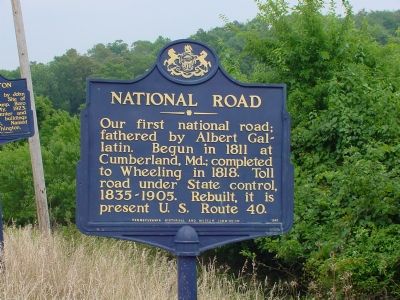 Photographed By J. J. Prats, August 27, 2006
1. National Road Marker
Inscription.
National Road. . Our first national road; fathered by Albert Gallatin. Begun in 1811 at Cumberland, Md.; completed to Wheeling in 1818. Toll road under State control, 1835-1905. Rebuilt, it is present U.S. Route 40. . This historical marker was erected in 1948 by the Pennsylvania Historical and Museum Commission. It is in Buffalo Township in Washington County Pennsylvania

Erected 1948 by the Pennsylvania Historical and Museum Commission.

Topics and series. This historical marker is listed in this topic list: Roads & Vehicles. In addition, it is included in the Pennsylvania Historical and Museum Commission, and the The Historic National Road series lists. A significant historical year for this entry is 1811.

Location. 40° 8.998′ N, 80° 19.68′ W. Marker is in Buffalo Township, Pennsylvania, in Washington County. Marker is at the intersection of U.S. 40 and Coffeys Crossing Road, on the right when traveling east on U.S. 40. This marker is on the western approach to the city. Touch for map. Marker is at or near this postal address: 3610 Coffeys Crossing Rd, Washington PA 15301, United States of America. Touch for directions.

Other nearby markers. At least 5 other markers are within 2 miles of this marker, measured as the crow flies. Washington (here, next to this marker); Wolff’s Fort (approx. 0.3 miles away); Revolutionary War Soldiers 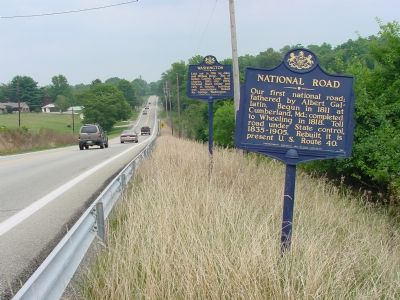