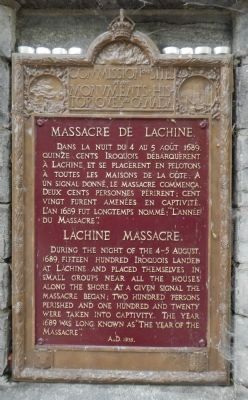 English:
During the night of the 4-5 August 1689, fifteen hundred Iroquois landed at Lachine and placed themselves in small groups near all the houses along the shore. At a given signal the massacre began; two hundred persons perished and one hundred and twenty were taken into captivity. The year 1689 was long known as "The year of the massacre”.

Topics. This historical marker is listed in these topic lists: Native Americans • War, French and Indian. A significant historical year for this entry is 1689. 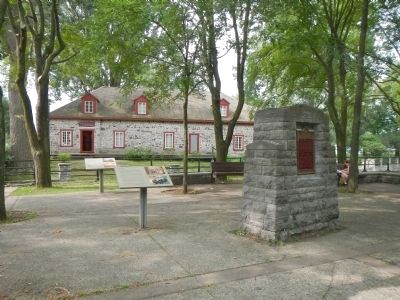 More about this marker. This monument is opposite the Fur Trade at Lachine National Historic Site building, across the Lachine Canal.

Also see . . .
1. Lachine Massacre - Wikipedia. The Lachine massacre, part of the Beaver Wars, occurred when 1,500 Mohawk warriors attacked by surprise the small, 375-inhabitant, settlement of Lachine, New France at the upper end of Montreal Island on the morning of August 5, 1689. The attack was precipitated by growing Iroquois dissatisfaction with the increased French incursions into their territory, and was encouraged by the settlers of New England as a way to leverage power against New France during King William's War. (Submitted on April 1, 2015, by Barry Swackhamer of Brentwood, California.)

2. Beaver Wars (1642-1698). The French and Iroquois Wars (also called the Iroquois Wars or the Beaver Wars) were an intermittent series of conflicts fought in the late 17th century in eastern North America, in which the Iroquois sought to expand their territory and take control of the role of middleman in the fur trade between the French and the more primitive tribes of the west. The conflict pitted the nations of the Iroquois Confederation, led by the dominant Mohawk tribe, against the largely Algonquin tribes of the area and their French allies. The wars were ones of extreme brutality on both sides and considered one of the bloodiest series of conflicts in the history of North America. (Submitted on April 1, 2015, by Barry Swackhamer of Brentwood, California.)
Credits. This page was last revised on August 28, 2020. It was originally submitted on April 1, 2015, by Barry Swackhamer of Brentwood, California. This page has been viewed 1,025 times since then and 157 times this year. Photos:   1, 2. submitted on April 1, 2015, by Barry Swackhamer of Brentwood, California. • Andrew Ruppenstein was the editor who published this page.
Share this page.