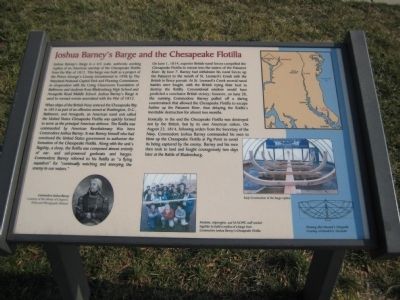 Joshua Barney's Barge is a 4/5 scale, authentic working replica of an American warship of the Chesapeake Flotilla from the War of 1812. This barge was built as a project of the Prince George's County tricentennial in 1996 by The Maryland-National Capital Park and Planning Commission, in cooperation with the Living Classrooms Foundation of Baltimore and students from Bladensburg High School and Annapolis Road Middle School. Joshua Barney's Barge is used to reenact events associated with the War of 1812.

When ships of the British Navy entered the Chesapeake Bay in 1813 as part of an offensive aimed at Washington, D.C., Baltimore, and Annapolis, and American naval unit called the United States Chesapeake Flotilla was quickly formed to serve as the principal American defense. The flotilla was commanded by American Revolutionary War hero Commodore Joshua Barney. It was Barney himself who had convinced the United State Government to authorize the formation of the Chesapeake Flotilla. Along with the unit's flagship, a sloop, the flotilla was composed almost entirely of oar- and sail-powered gunboats and barges. Commodore Barney referred to 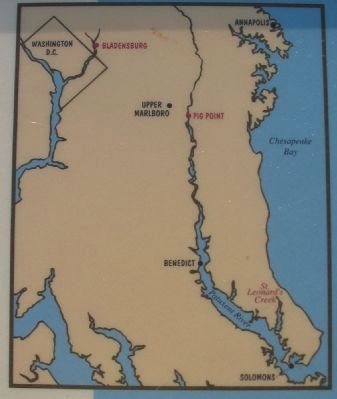 By Craig Swain, July 18, 2010
2. Close Up of the Map
his flotilla as "a flying squadron" for "continually watching and annoying the enemy in our waters."

On Jun 1, 1814, superior British naval forces compelled the Chesapeake Flotilla to retreat into the waters of the Patuxent River. By June 7, Barney had withdrawn his naval forces up the Patuxent to the mouth of St. Leonard's Creek with the British in fierce pursuit. At St. Leonard's Creek several naval battles were fought, with the British trying their best to destroy the flotilla. Conventional wisdom would have predicted a conclusive British victory; however, on June 26, the cunning Commodore Barney pulled off a daring couterattack that allowed the Chesapeake Flotilla to escape further up the Patuxent River, thus delaying the flotilla's inevitable destruction for almost two months.

Ironically, in the end the Chesapeake Flotilla was destroyed not by the British, but by its own American sailors. On August 22, 1814, following orders from the Secretary of the Navy, Commodore Joshua Barney commanded his men to blow up the Chesapeake Flotilla at Pig Point to avoid its being captured by the enemy. Barney and his men then took to land and fought courageously two days later at the Battle of Bladensburg. 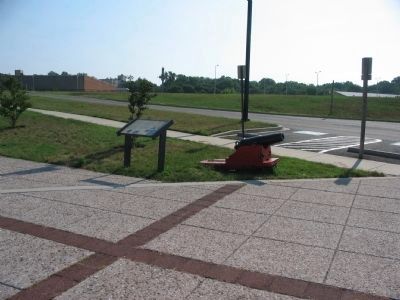 By Craig Swain, July 18, 2010
3. Marker and Reporduction Carronade
to build a replica of a barge from Commodore Joshua Barney's Chesapeake Flotilla.

Text with middle-right photo: Early Construction of the barge replica

Topics. This historical marker is listed in these topic lists: War of 1812 • Waterways & Vessels. 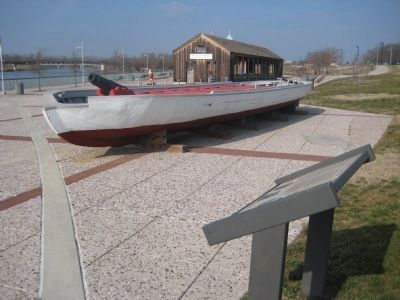 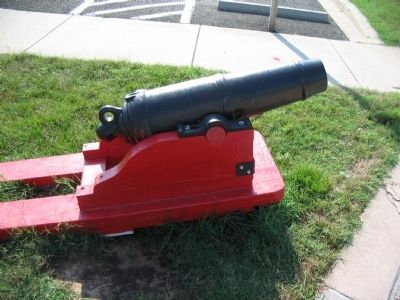 By Craig Swain, July 18, 2010
5. Reproduction Carronade
The carronade is the type of cannon which armed many of the light craft used in the flotilla. 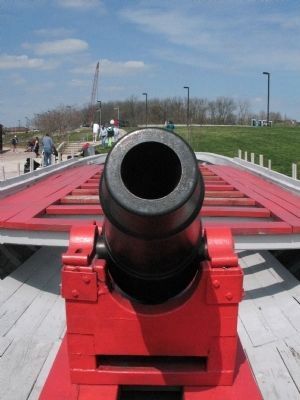 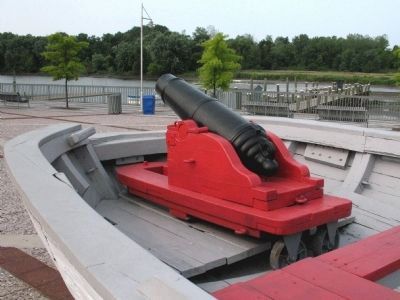 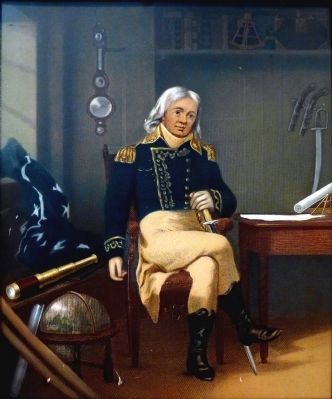 “Barney served in the Continental Navy and, after the Revolution, he joined the French Navy, and commanded a squadron.

At the outbreak of the War of 1812, he commanded the privateer Rossie. Upon entering the US Navy as a captain Barney submitted a plan to the Navy Department to use a flotilla of shallow-draft barges, each equipped with a large gun to attack and annoy the British in the Chesapeake Bay.