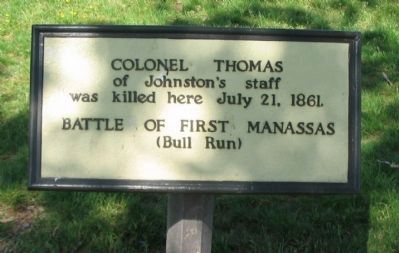 Location. 38° 48.782′ N, 77° 31.225′ W. Marker is near Manassas, Virginia, in Prince William County. Marker can be reached from Sudley Road (State Road 234) 0.7 miles south of Lee Highway (U.S. 29), on the right when traveling north. The marker on the Henry House Hill trail, which starts at the Manassas National Battlefield Park visitor center. Touch for map. Marker is in this post office area: Manassas VA 20109, United States of America. Touch for directions. 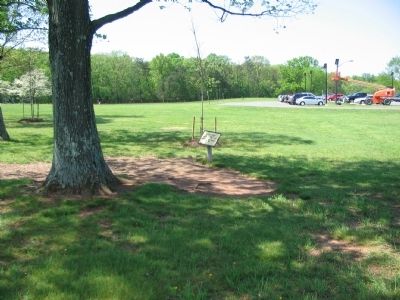 By Craig Swain, May 4, 2008
2. Colonel Thomas Marker
General Johnston's Report. Colonel F. J. Thomas was General Johnston's Ordnance officer. When writing his report, Johnson discussed Thomas' death, Colonel Smith's cheerful courage had a fine influence, not only upon the spirit of his own men, but upon the stragglers of the troops engaged. The largest body of these, equal about four companies, having no competent field officer, I placed under the command of one of my staff, Col. F. J. Thomas, who fell while gallantly leading it against the enemy. (Submitted on June 8, 2008, by Craig Swain of Leesburg, Virginia.)